The Immortals: Olympus Bound Book One 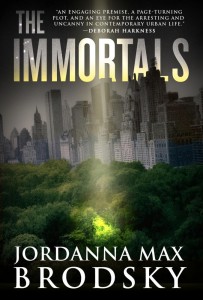 Sometimes when you are browsing at the bookstore, you find a hidden treasure. I was wandering my local Barnes & Nobles as I had some time to kill and they had a book in their new science fiction and fantasy section entitled, The Immortals by Jordanna Max Brodsky. I know I am not supposed to judge a book by it’s cover but the title had my attention. I picked up the book and read the back blurb.

I have mentioned repeatedly that my geekdom has its beginnings in the faraway past with my first reading of Bulfinch’s Mythology in the elementary school library. This book tags those feels so hard that there was no way that I was not going to be reading this book.

The Immortals is my Jam!

Jordanna weaves the tale of Selene Disilva. Selene Lives in Manhattan and works as an investigator. Her clientele is of a particular sort. She takes job where women are being abused and exploited and tries to give these women a chance at a better life. The book opens as Selene waits for her latest client’s problem boyfriend to show up. As the confrontation unfolds we get to watch as things go south but Selene gets lucks and is able to survive the encounter and ensure that, at least for a time, her client will not be abused further by her boyfriend. As Selene returns home, she laments the ever encroaching years that have inexorably sapped her strength and vitality. Unlike mere mortals, her years are numbered in the thousands.

On an early morning walk to exercise her dog, Hippolyta, Selene discovers the body of woman who has been murdered. On closer inspection, the victim has been dressed in the raiment of someone who has participated in an ancient greek rite. It is then we learn that Selene will not allow this death to go unavenged. She will once again take up her mantle as the protector of the innocent. Even if she will not take up her ancient name, Artemis.

The Immortals is a wonderful mix of mystery, suspense, romance, and exploration of greek mythology. Jordanna takes the reader on a trip through New York City with Selene as she tracks down the new cult that has started murdering women in her city. Jordanna’s descriptions are evocative of the thrumming energy that is New York City yet does an excellent job of linking these sites to the ancient rite that is unfolding. The complex relationship between Selene and the Theo, a professor of classics and mythology. Watching these two struggle to find a way to connect across the gulf of years that separate them was something that was heart wrenching and endearing in turns. Jordanna’s use of the Eleusinian Mysteries, different telling of the greek myths, and intriguing viewpoint on the cosmology of the gods of Greece was something that I loved learning about throughout the book.

I loved The Immortals. Jordanna Max Brodsky has created a wonderful tale full of greek myths, modern relationships, and historical research. These are things that don’t sounds like they would combine to create something so spellbinding but Jordanna makes it look easy. The characters are both human and mythical without ever crossing that line to make the characters something that was not relatable. Jordannna weaves in history, both ancient greek and geographical in a fashion to create an even more engaging story. The underlying Eleusinian Mystery which burbles up within the story is both tense in how it plays out but fascinating from the standpoint of how myths evolve. The afterword and acknowledgements that speaks to these historical points was a lovely touch.

If you are a fan of urban fantasy, paranormal romance, or mythology in general, The Immortals is a book you need to add to your to read list.

Four bear paws out of four. I can not wait for the next book in the series!