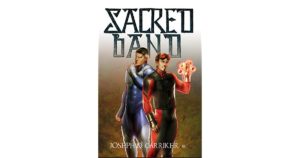 I’ve said that often here and I am a firm believer in it.

One of the places where representation is sorely lacking for the Queer community is superhero comics. You can look to the Big Two and there are only a handful of queer characters and even less that are the star of their own books. I am a fan of superhero comics and the absence of characters that I could identify with is always a sore spot.

Joseph D Carriker Jr is a superhero in his own right and has swooped in to my rescue with his novel Sacred Band.

Joseph sets about creating a world similar to our own. The pivotal factor being an event that struck around the world causing devastation and creating the world’s first empowered individuals. These people, referred to as the originals, are very similar to the Justice League or Avengers of the Big Two but down play the god level abilities that are normally associated with these groups. After these events, there continue to be Echoes that occur around the world. These create more powered individuals some of which do not survive their empowerment.

Sacred Band picks up the story of a small group of queer super powered individuals in 2013. Gauss is a young man attending college in Portland Oregon. He is open both about his sexuality and his empowered status. Deosil is a young woman with deep roots in the pagan community who struggles with the difficulties of being trans while learning more and more about her elemental powers. Optic is an Ex-Seraphim. He was drummed out of the Air Force for being gay right before the repeal of Don’t Ask, Don’t Tell. He has used his ability to transform into light and fly to create a career in Hollywood for himself. Llorona is an older woman who works for the Golden Cross using her sound based powers to rescue victims of natural disasters and echo events. Last but not least is Sentinel. He is one of the Originals and very much a Superman Analog. He was a member of the first superhero team but has since vanished from the public eyes when he was outed back in the time when being gay was completely unacceptable from an icon.

Joseph gives the reader everything they would expect from a superhero novel. there is action that is well choreographed and flows well across the page. He treats it with a lyrical tilt that was refreshing to read. There are secret identities, vague yet menacing governmental agencies, conspiracies, and globe-trotting adventure. Unlike Icarus, Joseph keeps his characters grounded. They all have incredible powers which are put on display for the reader. Instead of dominating the narrative, they complement the humanity that fills each of these individuals.

There are poignant moments scattered throughout this book that make my heart weep and sing. There is a scene where Deosil is at a Pagan conference and is giving an interview. The interviewer pushes the point of asking about her dead name. The conference comes to her rescue and escorts the offender out but it highlights the struggles that a trans person faces every day and gives voice to it within the pages of this book. The narrative touches upon the difficulty of coming out and being outed at different times in history as we hear how Sentinel faced such public outrage for being gay while the cost, though steep for Optic, was not a life of exile. Joseph takes the time to delve into the difficulties of dating as a member of the queer community.

These human moments could have easily been overshadowed by super powered antics and melodramatic tentpoles. Instead, Joseph made them the heart of his story and has created something that transcends the genre. I was drawn into the lives of the characters and felt both their love and their loss. I was both sad and elated at the end of the book. I was sad that the story had ended but elated that I had found a story that both represented me in the story and embraced the superhero genre that I love.

I bearly recommend this book!