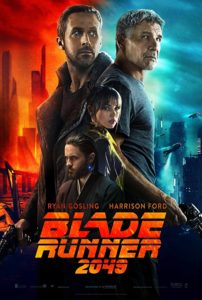 I had seen the trailers and I was intrigued by the imagery that they presented.

I love Blade Runner. The blend of old and new to create a gritty futuristic look. The noir aesthetic blended with the burgeoning genre of cyberpunk.

I wanted to see what this world would look like with the benefit of new technology and a different hand guiding the project.

I was highly disappointed.

It felt very much to me like Denis Villeneuve understood as much about emotions as the Replicants. Where Blade Runner was a symphony playing with ideas and questions while embracing the laconic feel of a noir mystery. Blade Runner 2049 has the shimmer of a diamond only to have the reality of a costume jewelry revealed upon closer examination.

This can be seen in the character of K, played by Ryan Gosling. K is a Blade Runner tasked with retiring the Replicants that are still at large despite the 30 years of hunts. In the opening scenes, K finds an older model Replicant hiding out on a farm in the wilds near Los Angeles. The conversation and fight reveals that there is something happening in the background that could shake the world to it’s foundations. Through the violence and revelations, K appears to be little more than a cardboard cutout who is taking up space on the screen. Gosling’s performance portrays someone little interested in the world around himself save to move on to the next thing. There are no hints to restrained emotion or hiding things to get by. Justa deep ennui that leads one to wonder why K is following any of these threads at all.

further disappointment is provided by this film in the characters of Love and Joi. These two characters are outstanding in an otherwise drab and emotionless expanse. Luv, played by Sylvia Hoeks, is the quintessential Femme Fatale of noir fiction. She is all smoldering emotions reined in to a greater cause. She steals every scene she is in even when she is just standing in the background. She is the villain of the piece, but as the story unfolds it becomes much easier to see her motivations and actually care about them and her. Joi, played by Ana De Aramas, is a companion program that keeps K company. She is the iconic damsel in distress in noir fiction with the twist that she has much more agency than those characters did. She provides the opposite end of the spectrum to Luv in that she actually cares for K and is willing to risk it all to stay with him.

Luv and Joi provide well rounded, believable characters in an otherwise sterile and derivative world. They provide sharp emotional counterpoints to an otherwise empty and listless narrative. These two characters are also ill used in the climax of the movie; thus leaving the audience without either love or joy.

Couple this with the cinematography of film. The screen is filled with gorgeous scenes presenting a vision of this overpopulated future. The shots are gorgeous but create the feeling a barren and empty when we are led to believe that the world is suffering from overpopulation and a lack of living space. It is a ham-handed way of trying to comment on how people get lost as individuals in the great wash of humanity. Instead of showing us this in a new and unique manner, we are given a sanitized future that leaves me really just be watching the original.

Overall, Blade Runner 2049, is very poor substitute for the original. If the director had committed more to the characters of Luv and Joi, this vision of a dystopian future would have been a much better movie. Instead, I am saddened by the loss of Luv and Joi and wish I could get my three hours back.

One bear paw out of four. If you must see this movie, borrow someone’s Netflix so that you are not spending your money on it.