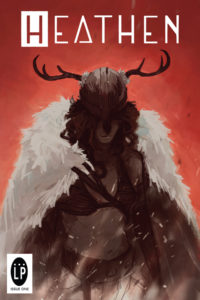 It’s pride month and I want to talk about comics.

To do this, I want to talk about a book that tells an excellent story while still embracing queer content.

Heathen is just such a book. It is written and drawn by Natasha Alterici. This is her creator owned title which she funded on Kickstarter back in 2015. She has done work on Gotham Academy and Grayson. She is also a member of the LGBT community.

Heathen is a reimagining of Brynhild legend from Norse Mythology.

Alterici does an excellent job of getting someone unfamiliar with Norse Mythology caught up on the story. Our heroine, Aydis, tells the story to her horse as she begins her journey. As she winds the tale up, she shares how long the story has passed down through her clan and laments that Brynhild has been waiting to be free for a very long time. The exposition feels very much like a story that a skald would tell over a fire to enthrall a mead hall. The art that supports the story is evocative. It has a rough hewn quality that feels like a gritty dream.

The core point of the myth is that Brynhild is rescued by a brave warrior whom she is then required to marry by the decree of Odin. Aydis has taken it upon herself to free Brynhild from her captivity and the consequences be damned. Aydis, you see, has nothing left to lose. Her village thinks her dead as she was condemned to death when she was caught kissing another woman and did not deny that she did this of her own free will.

I love this book!

It hits on all the things I love and want. We have mythology remade. I am familiar with the Brynhild story as well as the variations on the theme that can be found in Wagnerian operas. Alterici takes the story and blends in a modern sensibility with social justice themes. Her wild concoction is exhilarating. She gives us a book with a queer hero that is not afraid to be who they are and this makes my heart skip a beat. And in the process, gives us a modern Norse Myth where the hero is a woman to boot. It has been long overdo and the power of the story is amplified by this choice.

The art is gorgeous as well. It has a deep scratchy feel with rough hewn edges. It has a warmth and authenticity that adds to the story being told. In particular, I like how Alterici’s style makes the brief combat with a bull in issue one is handled. The action is quick and fluid without anything feeling blurry or hard to follow. The detail is never lost in the flow of the conflict.

Heathen by Natasha Alterici is a book that needs to be on your pull list. Great story, excellent art, queer content, A strong Heroine,socially aware themes, and mythology remixed. What’s not to love!

It is currently on issue four so it will not be difficult to get caught up.

Four bear paws out of four.