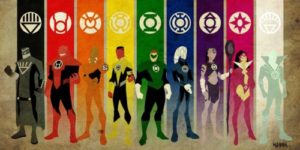 It has been a long time since I’ve written about myself.

I was looking back at one of my old blogs and realized that It was way back in 2012 when I was just beginning the process of coming out that I had stopped writing about me.

I had used as framework for my musings, The Emotional Spectrum.

For those not in the know, I am referring to the different Lantern Rings from DC Comics. It started with the Green Lantern which represented willpower. As the storyline progressed other colors on the rainbow were added. It started with Yellow and fear and later Violet representing love. It was leading up to Darkest Night that the spectrum expanded to include all the colors of the rainbow as well as white and black.

I will freely admit that it is a simplistic approach to emotions and yet it resonates with me. The idea that emotions can be weaponized and harnessed for good or ill is both literal and figurative. You can see in everyday interactions how emotions are manipulated by others to gain advantage and leverage against others. The stories that are possible within this idea are also limitless.

Which always leaves me a bit disappointed in DC and it’s handling of the Emotional Spectrum as they take no risks and tend to leave everything in the hands of the old tried and true without tapping the depths that can be found in this idea.

so, I will put fingers to keyboard and talk a bit about where I am today and what I am doing to push forward. It will be centered around each of the Lantern Rings and I will not shy away from the Black or the Red.

If you would like to see my first crack at it, you can find it here. Start at the Emotional Spectrum and work your way up.