In the past few months, I have been one of the ten thousand a lot.

One of the things of which I was ignorant was Welcome to Night Vale.

My tastes in science fiction and fantasy tend to run towards the more mainstream variety. Mythology being the dominant theme that occupies most of the media that I consume. I love things that are quirky but they have to brought to my attention if they fall outside of my sometimes limited vision.

Welcome to Night Vale is just such a quirky podcast that straddles many genres and does it with a style and grace that is just breathtaking. The show takes the cosmic horrors that populate the writings of H P Lovecraft and August Derleth and blends them with the existential horrors that populate the lives of those of us living the life suburban. A good example of this is when the radio show speaks of the local bowling alley. The audience will be informed of the ancient city that has been discovered in a hole by the pin setter. The discovery prompted by the loss of a bowling ball falling into the depths of the city and the noise it makes echoing across the vast halls. The narrative then quickly swings to the mundane as the owner asks that people getting their bowling shoes know their size so that this part of the process could go quicker.

Welcome to Night Vale embraces the idea of the uncaring universe and shows the perseverance of human nature as it’s citizens try to continue on with their lives despite knowledge of their small place in the vast cosmos.

There is so much to love about Welcome to Night Vale. There are certain things that provide anchors for me to the show that I wanted to point out in particular.

First, There is Cecil, The Voice of Night Vale. He is our window onto Night Vale and the host of the radio show to which we are listening. He tells us of the community radio station for which he works as well as about the people that live in the town. He is the human connection to this strange place that is nestled somewhere in the deserts of America. As the show progress he provides us personal asides both in context to the stories that he presents as a journalist and out of context as a member of the community of Night Vale. A perfect example of this is Steve Carlsberg. There are points where things are going wrong and Cecil will become distracted by something small going wrong in the community and will blame Steve. He will go on, at length, how Steve is the one to blame for not doing things the way they are supposed to be done. 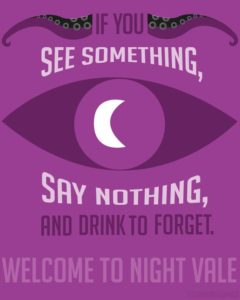 Cecil is also an unreliable narrator. He is our human connection to all this weirdness. As we listen, he paints us a picture of a place that is in turns, weird, wondrous, and prosaic. He tells us stories of the people, the culture, and the government of Night Vale. All these things bring us, the listeners, into his circle of trust. As we listen, it quickly becomes obvious that Cecil is not giving us the whole story. Not out of maliciousness, but due to the very nature of Night Vale itself. There are points where he points out that writing utensils are illegal as are books and yet he has attended school and has taken notes on stories that he reports on. Combine this with frailty of the human mind when confronted with the immense powers of things like the Glow Cloud. It comes to town and we are given ongoing reporting on the crisis. At the peak of the crisis, Cecil reports that the denizens of Night Vale have begun worshipping the Glow Cloud and then begins worshipping as well. When we return to Cecil in a non-worship mode, we learn that he has no memory of the past time period and that all recordings of what has happened are blank. Did what we just here about the community really happen or were the stories that we listened to during the episode just fabrications of the Glow Cloud?

I also love that despite the horror and absurdity that are part and parcel of Night Vale, the core of humanity is never lost. It embraces the dichotomy of humanity and shows the listener the heights to which humans can reach and the lows to which they can descend. It does this by illustrating that Night Vale is a small insular town and yet embraces diversity. Cecil provides the best example of this. From the first episode, we get to watch as Cecil falls in love. A scientist, Carlos comes to town to investigate the oddities inherent in Night Vale. We get to listen as Cecil waxes poetic in his descriptions of Carlos whenever he enters the narrative. Welcome to Night Vale is a community radio program and we get to listen as Cecil goes from a crush on a handsome scientist to dating him and this is perfectly acceptable by community standards. For me, this was a standout and something that drew me in quickly as this was a place that was weird but accepting. But the show also doesn’t allow you view the citizens as fine upstanding people though. It takes the time to show them as insular and fearful of change as are most humans as well. There is an episode about a traveling carnival. As the story progresses, we are set up to see this thing as some traveling evil that has come to prey on the city. The build up is similar to the movie, Something Wicked This Way Comes. At the climax, we watch as the people of Night Vale unite to drive out the interlopers. As they flee, we get to see that it was just a regular carnival and that Cecil and the people of Night Vale have given into to fear of Strangers and done something horrible as the carnies flee for their lives from the hatred of these people whom have become as monstrous as some of the threats that they have faced.

I am so glad that I was introduced to Welcome to Night Vale. It brings me into a weird, funny, and scary world that is welcoming and terrifying in turns. The storytelling is so engrossing that I look forward to each new episode to see what little piece from prior stories will crop up and become the next big bad. This show also has a penchant for punching you in the feels with no warning and this something that elevates this from entertainment to art in my mind. If you have not listened to Welcome to Night Vale, you should remedy this egregious error quickly.

Four Bear Paws out of four.