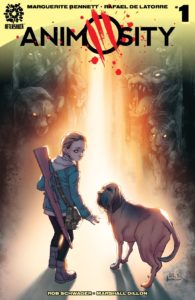 My taste in comics can be described as vanilla. My fandom runs the regular superhero circuit with a few forays into the independent arena with titles like East of West or Thief of Thieves. My exposure to companies other than Marvel, DC, and Image is also limited as Valiant has been the only new company added to my pull list in a long while.

Luckily I have friends that also read comics and have decided that my horizons need to be broadened. I went out to my friend Stick Pup’s local comic shop to check it out. My habit is to always buy something at a local shop if I visit to show support for the people in my fandom in the area. I picked up several Rick and Morty trade paperbacks and some Star Wars comics for a friend. While looking around, Stick Pup began adding things to my pile. The list is a bit extensive and I am slowly plowing through it. The piece that stood out for me was Animosity from Boom Studios.

The trade for volume one was gorgeous. The cover, as it should, arrested my eye. It is a picture of a little girl with a rifle on her back, her loyal dog by her side. Standing outside the light, the shadowed faces and glowing eyes of wolves can be seen looking on. I was sold from this image and it was the first thing I read from the pile when I had the chance.

The premise behind Animosity is that one day, all the animals on the planet woke up. Not in that they were asleep but that they were not conscious in the way that humans are. The story then spools out from there. The animals gain not only consciousness but understanding as the world is not suddenly filled with billions of two year olds. The animals just awaken, as if from a dream. For the most part, these new sentients have the cognitive capacity of an adult with exceptions just like humans. The results are spectacular.

I love the story that Bennett has created. she creates a world where instead of the animals becoming another zombie plague, they become people just like us. They have their own motivations, their own capabilities and biases. She highlights these individual quirks throughout the story with little scenes illustrating how the animals dealing both with their relationships with humans and other animals. In particular, the first few pages we get to see as animals wake up in various situations. There is a recurring panel where there is a family at the vet with their god, obviously struggling with the decision to put him down. The next panel we are shown the dog telling them “Don’t cry. I understand…I forgive you.” Gut punch! On the flip side there is a series of panels with cute pandas being cared for. The tilt happens and they have grabbed guns and are committing suicide crying, “Why did you keep us alive for so long?” Another gut punch.

These vignettes serve as a backdrop to the journey of Jesse and Sandor, an 11 year old girl and her loving dog. WE get to see how the family survives the early days of the awakening and how the two then survive after things go south. Bennett takes the faithful dog trope and turns it on it’s ear as everything in the world goes sideways and that loyalty and caring are tested in ways that are sometimes difficult to watch.

I talk about the story but the art is stupendous on this book as well. The panels I mention earlier are all small squares, part of a larger page. But each one captures the tone and emotions and conveys it unmistakably.De LaTorre has way of capturing complex scenes and communicate the myriad emotions with aplomb. He takes the depth of the story that Bennett has crafted and renders it lovingly on the page.

I could rave about this book a lot but I don’t want to spoil it. Bennett has crafted a world that I want to know more about. I devoured this story quickly and am waiting for more. The art lives up to the standard that the story sets and leaves nothing behind. My one caveat is that if you are soft hearted where it comes to animals, then this may not be the book for you. The violence can be brutal and heart-wrenching.

This is a four bear paws out of four book. You should definitely pick up the trade and add the second series to your pull list. I am looking forward to seeing more of the Journey of Jesse and Sandor and those that they pick up along the way.

I bearly recommend this book!