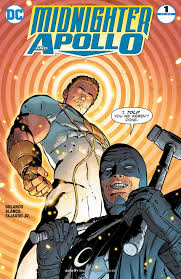 Once again, I have been remiss.

DC Comics has had a title out that I’ve been reading since issue one and it is definitely something that I should have spoken about here.

Midnighter and Apollo replaced Midnighter after it’s short run. It picked up the story of these two gay super heroes after they had been reunited at the end of Midnighter. The title is currently on issue six.

I was ecstatic that these two once again received their own title. I had been a fan of the characters since The Authority. I know that they had appeared prior to that but one remembers their first exposure to character more than the actual first appearance.

Let’s start with the obvious reason for enjoying this title which is that it features a gay couple. For superhero comics and DC Comics, this is something that is rare. So, getting to see my tribe represent in one of my favorite media makes me happy. In particular, Orlando treats them like a couple. there is touching, kissing, and the regular interplay that you find between any couple. There is no shying away from it or treating them like they are just a team like Batman and Robin. A good example is two panels from this latest issue where the two are fighting their way out of hell. In one panel midnighter says, “You blew me up. how’d you know I wasn’t the bendable one?” In the next panel Apollo responds, “Please..you think I don’t recognize the back of your head?” Priceless!

It is this normalization of the relationship that makes this book stand out for me. This treatment had been a staple of the characters back in The Authority but had been stripped from them when they graced the pages of the New 52 at the beginning. Seeing it being embraced once again was like seeing a piece of art being restored. It made me happy.

For those unfamiliar with the myth, allow me to give a brief synopsis. Orpheus, the son of Apollo, was a great musician. He fell in love with the Eurydice, a woman of unique beauty and grace. It was believed that their union was perfection that would endure. But like all things, a prophecy was made that told of Eurydice’s coming demise. Upon her death, Orpheus’ grief was so great that even the gods were moved. Apollo and the other gods provided him their protection so that he might descend into the underworld and retrieve his love. Hades had one catch, that Orpheus could not look back upon his love until they had returned to the surface. Having been so long without her and not trusting Hades, Orpheus looked back and lost his love forever.

The greeks did love their tragic love stories.

I love that Orlando uses the classical katabasis as the hook for a six issue story. He takes a story that is a quintessential love story and allows it to encompass these two characters and evolve just like the greek myths did in their retelling to each new audience. It allows you to know the basic story structure you are going to see throughout the story but the details are where you will be kept wrapt.

Orlando does not disappoint.

My one nitpick with the book so far is the art. It is good but there are no points where I want to spend more time with the art. Even the covers lack the punch that I get from my other favorite titles. It’s not bad, but it doesn’t elevate the story the way I expect the art too in a comic.

Midnighter and Apollo is a great comic. It provides a great story with good art and excellent representation. Definitely something you should have on your pull list at your local comic shop.

Three out of four bear paws.