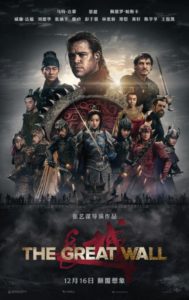 When I first heard of The Great Wall, I was unimpressed. I heard the cries of whitewashing and quickly climbed on the bandwagon. The first trailers did nothing to dissuade me from this this viewpoint.

I then saw a trailer that introduced the idea of monsters.  I will freely admit that my mind immediately jumped to Chinese dragons. In my head I was all, “Fuck Yeah!” The idea of the Great Wall being built to defend China from monsters was intriguing. I asked my friends Rob & Terry if they would like to go see The Great Wall with me and they said yes.

The Great Wall is, at it’s heart, a gamer movie. The plot is a straightforward adventure scenario. Our intrepid adventurer, William, is on a mission to find black powder and bring it back to europe to become rich. He and his comrade Tovar are the only survivors of their caravan to reach the Great Wall. Their lives are spared when it is discovered that they have defeated one of the monster that has been assaulting the wall on their own. What follows is William’s process of discovering what it takes to defend the wall from the monsters and what it takes for him to trust someone one. The visuals are well done, and the acting is good, if a bit predictable.

I loved the costume design. The army that stood watch on the Great Wall was divided into different functions. Each function had a different style of armor. Their armor was very stylized animals with a particular color. The most flamboyant were the blue crane units which were composed entirely of women. Their job was to leap from platforms on the wall into the monsters that were climbing up in order to slay them before they reached the top. The colorful armor made what could have been a dark and brooding movie something much more vibrant and visually exciting.

I also appreciated that they took the time to create an army unit that was entirely composed of women. The unit’s leader also happened to be the general’s favorite commander. The twist comes when the general is grievously injured. Instead of going with what would be standard, he gives command of the army to Commander Lin Mae, the leader of the all female unit. in addition, there are no points in the movie where her decisions are questioned by her commanders. Her orders are treated just like any other general and this was refreshing to see and unexpected.

The visuals on the movie were also gorgeous. The monsters in the movie are sadly not chinese dragons. The monsters were Tao Tie, a mix of fu dog and demon. The look was something that was definitely chinese in origin. The CGI was well done with there only being a few instances where I could call out the effects for being obvious. There is also a scene at the climax of the film that is beautiful. William and Mae are fighting up the inside of a pagoda. The sun is shining through the windows creating a myriad of rainbows through which the two fight and move to save the day. It was wonderful!

I was pleasantly surprised to discover that Matt Damon was not the whitewashing that I was lead to believe he would be. william’s character provides the initiating action which brings the audience into the film. He and his companion bring a base reason for seeking out this foreign culture. They originally are seeking to exploit it for it’s riches without any knowledge of the true richness present. As William moves through the events that unfold around the wall he comes to appreciate this new culture as well as rethink his own perspective. It strays far from the idea of whitewashing and outside of William and Tovar, the main characters are chinese. In addition, William is not the sole savior in the movie. Lin Mae and Tovar both take turns rescuing our erstwhile protagonist and the climax of the movie require both Lin Mae and William to work in concert.

The Great Wall is a wonderful gamer movie and an excellent B Movie with grade A effects. It does everything I would want out of a gamer movie without sacrificing a solid design aesthetic. The plot is straightforward and the acting is acceptable. Well worth seeing at a matinee, especially if you are a gamer.

Three out of Four bear paws!

For over two years I have had the goal of going to a Bear Run.

I am a shy person and going to an event alone is not something that I am confident in doing. I have let the time pass so that any run that I looked into the host hotel was sold out. I was able to avoid stepping out of my comfort zone.

This year was different. I had several friends that were planning on attending a bear run that was right in my backyard. North American Bear Weekend is held in Lexington, Kentucky. Just about an hour down the highway from me. So, before I could let the specter of procrastination allow me to miss another Bear Run, I went online and purchased my North American Bear Weekend Pass, added the Bourbon/Beer Tour and booked my room at the host hotel.

I was very lucky that friends decided to take me under their wing for the weekend to make sure that I had a good time and help out if the event became overwhelming.

NAB was a great run. I may not be experienced with a Bear Run but I have attended many gaming conventions of varying size and I think they are a fair comparison for a Bear Run. Unlike many smaller conventions I have attended, things ran smoothly throughout the run. This was impressive knowing that this was a new venue for the event. The registration experience was quick and painless. It took only a few minutes to get through the line and have my wrist band.

There were events scheduled each day to provide the attendee with something to do. These ran the gamut from pool parties with karaoke to dance parties with different themes. There was a gaming room that supported the local Gay Straight Alliance and a vendor hall as well.

There was so much going on that I did not get to all the things that I wanted too. There are several things that made the run a great time a 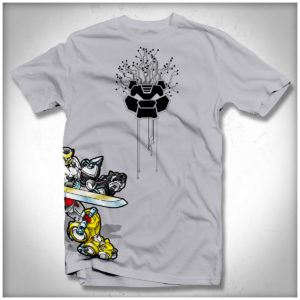 nd I wanted to call them out here.

First, was the vendor hall. I mentioned that I go to gaming conventions so a trip to the vendor hall is always in order. I didn’t know what to expect and was pleasantly surprised. It consisted of over a dozen vendors. The preponderance of them selling cool bear t-shirts. There was also a leather vendor, kilts, underwear, wood art, decorative glass, jewelry, a bootblack, and men’s grooming. Needless to say, I spent a lot of money. My favorite shirt that I picked up at NAB came from Growl Wear. The had a shirt that is entitled Ursatron. It has a giant robot similar to Voltron done with bears! I saw this and I was all “Take my money, Please!” Scott and Kent who own Growl Wear were very kind and helpful and even when I could not make up my mind what I wanted to buy. I ended up picking up four shirts from them. I picked up shirts from KillerBob Graphics, and Bear TShirts.

There was also a leather booth in the Vendor Hall, WolfStryker Leather. I was drawn into the booth by the harnesses that had the Flash symbol as well as several other nerdy pieces of leather. I went in and looked at them a 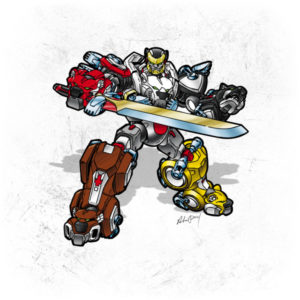 s they were well done. They had several Harry Potter pieces as well. I finally decided to take the leap and tried on a harness. It was a pretty fun process.The people at WolfStryker made me feel very comfortable and my friend Terry helped me make a good choice. It was fitted and fixed in under a half an hour and I had a wonderful new harness that made me feel handsome!

Finally there was a booth that had burned wood and copper art work pieces. There were many pieces with a bear motif as well other nerdy pieces. I fell in love with one piece in particular. It was a tribal owl holding a key. Just beautiful. The name of the booth was Pyrography & Copper Work Lb. Turns out that I was given the Owl later in the weekend as a gift. It was a bit overwhelming. The artist was there but I forgot to tell him thank you for creating such a beautiful piece.

The piece I received

The run itself was a bit overwhelming. There are lots of people there, but unlike a gaming convention, I had a limited frame of reference for which to interact. Everyone was cordial and polite but my inherent shyness definitely made me feel out of place.I was lucky to be at the Run with friends who made it much more comfortable for me.

There were two things that I did get to do that were fun and I wanted to talk about. There was the pool parties. The hotel pool was taken over by the bears and Karaoke was happening. It was a very relaxed sort of event. There were bears of all types in the pool so it was easy to not be self conscious in the pool or hot tub. There wasn’t the judgmentalness that one would expect from a gathering of gay men. Everyone was laughing and having a good time. It was something that was new to me and was very exhilarating!

Another of the events that I enjoyed was a dance party. The one that I chose to attend was the Jocks & Socks Dance. I saw it in the program and decided to do it despite it being well outside of my comfort zone. Dancing! In a jockstrap! With People Around! Before the dance, I went to my room and got ready. I just sat there for a while and contemplated not going. My friend, Bill, texted me to see what I was doing. I explained and he just replied that he was at the bar with some of our friends. So, I plucked up my courage and went down to the bar. My friends and I were able to convince Bill to join us at the dance. It was amazing! Once again, Bears of all types with no judgement, just dancing. It was so good! The music was amazing as well. DJ Shane Phoenix Harris provided an excellent soundtrack for the night.

Overall, I had a good time at North American Bear Weekend 2017. It was run filled with guys that crossed the spectrum. It felt like an environment that was welcoming to those of all types without being judgemental. The people who put the run together were calm, cordial, and organized and seemed to care very much about everyone’s experience at the Run. I definitely want to go back and purchased my tickets to the next run on the last day of the Run.

Four out of Four bear paws. If you have not been to a Bear Run before, I have to say that giving NAB weekend a try as you will not go wrong.