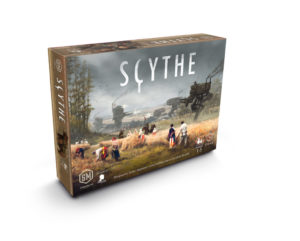 Last year at GenCon, One of the hot board games that you could see being played at almost every hotel was Scythe. I noticed it being played a lot and stopped at one game when I noticed that one of the miniatures on the board had a big bear on it. There were mechs that had a very steampunk vibe with a blend of eastern-block Russian styling. I was intrigued but had already spent way too much to be able to plunk down the amount that the game cost.

I have now had the chance to play the game a couple of times and am regretting not picking up the game back at GenCon. It is fun and engrossing with many permutations that the game can take.

The premise of the game is that you are one of five factions that is vying for power in an alternate 1920’s Eastern Europa. A long war has just ended with the closing of The Factory which had created the war machines that had devastated the countryside. You now strive to seize territory and win the hearts of your people and reign supreme by gathering the most treasure.

I love the premise. The game pieces go to great lengths to be evocative of the feeling that this background presents. There are player mats that provide pictures of each faction’s leader. They are presented in a setting depicting both the leader, the mechs of that faction, and the terrain in that home territory. The encounter cards have artwork that provides a story and then the choices that you make are drawn from this story allowing you to choose an option that either wins you the hearts and minds of your people or a path to power at all costs.

The production values on the game are fantastic! Yes, it has wooden meeples. They are the workers that you come to expect from this type of game. The wooden pieces also are buildings, recruits, and markers

The heroes of Scythe.

that are moved about based on the choices you make as a player.The pieces shine in the mechs and the heroes. Each faction has it’s own type of mech that are rendered in plastic and definitely worth painting. The faction’s mechs are designed to be distinct and match up with the illustrations on the cards and game boards. The heroes are also made of plastic and are each unique. Each leader matches the picture on the faction board and has the signature animal with them. I am particularly enamored with the Polania faction as it is the one that has the big bear but each faction leader piece is well done.

The board itself is also gorgeous. It is a map of Eastern Europa divided into hexes. Having done some mapping in prior work, I appreciate well-done cartography. The artwork on the map is also top notch like every other piece of art that is found throughout the game.

The rules of the game are fairly simple to understand but allow for multiple paths to victory. It is very much an engine building game. You begin slowly working your way to building up supplies and taking territories while setting a plan in motion to get to the end game. Much like chess, Scythe requires you to think several moves ahead of the game as well as ahead of the other players. It also allows for flexibility so that if you make a mistake it is not crippling.

I also like that it allows for play for one to five players right out of the box. It is nice to see a game with this type of production values ensure that you can play it with so few people.

My only complaint is more an observation. Scythe has a lot of fiddly bits that have to be put in place to play the game. There are lots of bits that are in motion throughout the game and then have to be cleaned up once completed. I like a tactile game that requires a lot of fiddly bits but the setup and teardown of the game can be a bit off-putting.

Scythe is an excellent game. The background of the game is interesting, the artwork evocative, and game playing engrossing. The way that factions and playmats are distributed make it so that scythe has a large amount of replayability. It does come with a hefty price tag but the amount of detail put into this game makes the price tag acceptable. I, myself, am waiting for the game to come back in stock at my local game store.

Four bear paws out of four for Scythe! If you are a board game fan, this is a game that you definitely need to add to your library.