Green Lanterns No 15: A Day in the Life 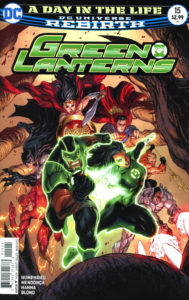 That is how much I love Green Lantern and the other lantern corps that originate with the pages of his comic.

DC Comics has undergone another reboot entitle DC Rebirth. The titles of the DC Universe take up after the events of the Darkseid War and begin to patch together the storylines that have been present in the New 52 and things that had gone on before Flashpoint. In Green Lanterns we get too follow Simon and Jessica, the two new guardians of the earth and it’s space quadrant.

A Day in the life is a great jumping on point for this these two characters as well as a wonderful story in and of itself.

First off, I love stories about heroes that are a slice of life for them. These take the time to show us these characters both in their ordinary guises and highlight their own personal struggles that continue despite the harrowing adventures they undertake.

A Day in the life is no different. The issue opens up with panels of Jessica waking up in the morning. The text on the page is Jessica telling the audience what, on most days, is the greatest battle she faces. Jessica suffers from Anxiety. Each day she faces the thought that she can not handle the day and why get out of bed anyway. We follow jessica throughout the day as she meets with her partner Simon, whom works with her to fulfill her potential as a Green Lantern as well as learn more about himself in the process. We get to watch as she struggles with the responsibilities of wearing the ring while struggling to fight off an anxiety attack throughout the day.

There is a poignant moment where Jessica is not able to push off an attack any longer. In the middle of a battle with a lame villain, she freezes and Simon keeps her safe and cleans up the villain. He allows his ignorance to show by stating that he thought Jessica was getting better. She calls him on this ignorance and points out that it never gets better. It is something that she will struggle with indefinitely and flies off.

Jessica realizes that she lost control and stormed off. So, she takes the time to do the things that will make the next battle a little bit easier. We watch as she works through these steps and shows us how they are her armor for the coming battle.

In the end, She faces another morning and another battle and is able to get out of bed and face the day as a Green Lantern. We even get to see Simon show up to apologize for his lack of understanding of how things worked and continue to provide her support as she continues her fight.

This issue provides so much that I want out of a comic that it makes my heart ache. We get to see my favorite thing in the DC Universe taking a stand to give us a diverse title in almost every way. We get to see two people take up the ring that are not often presented in the Corps. On top of this we get to see one of these heroes struggle with a mental illness and have it treated with a modicum of grace that is unusual in comics. All of this excellent story telling is graced by beautiful artworks that just draws one deeper into the story.

Humphries and Mendonca have done good work on issue 15.

If you have not given Green Lanterns a try. This is a great issue to jump in. It gives a great picture of these two heroes while also highlighting the issues surrounding those that struggle with mental illness. A definite four bear paws out of four on issue 15 of Green Lanterns.

I know that is cheesy but I don’t care!