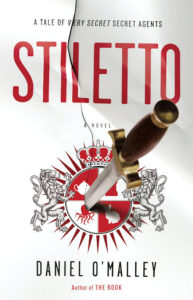 I enjoy urban fantasy that mixes spy tropes with supernatural powers and mysterious phenomena. I will give these types of books a chance whenever possible. Daniel O’Malley provides this in Stiletto.

Stiletto picks up the story of Myfanwy Thomas from the first book in the series, The Rook. Myfanwy has successfully survived the attempt to take over the Checquy, Britain’s covert supernatural ministry. She now must negotiate the merger of the Checquy with their most hated enemy, the Grafters.

Stiletto follows three characters through the story to provide a fresh perspective on this unique world created by O’Malley.

There is Felicity whom is a pawn in a combat operations team. Her power is the ability to extended her awareness into the past or through an object. She has been trained to use her psychometry on behalf of her country as well as to be able to handle herself in a fight. She, like all pawns of the Checquy has been raised to fear and hate the Grafters and wonders when the ball will drop and she will be called on with others to attack their one-time invaders.

Odette is a young Grafter who is a protege of the founder of the group. She is a skilled surgeon, geneticist, and all around scientist. Odette has been enhanced through the science of the Grafters to be an even better surgeon as well as stronger and better able to defend herself via retractable claws that drip poison. Odette has learned to keep herself hidden and adopted a paranoid approach to life as all Grafters are taught that the Checquy will kill them if they are discovered.

This leaves us with Myfanwy. She is a Rook of the Checquy whose power is the ability to control the bodies of anyone within 200 feet of her. Her job entails overseeing the activities of the ministry here at home. This means she is still picking up the pieces of the failed coup and organizing the merger of these two groups that hate each other.

Stiletto has everything I love about urban fantasy. There are strange powers that range from just being able to change how a person smells to being able to throw green flames at an enemy. The Grafters provide the addition of super-science as they have turned the art of alchemy into the science of genetic manipulation and control of the various life forms. They adjust themselve and animals to do things beyond the natural. I particularly like how O’Malley blends in the covert aspects of spy fiction into this world as both the Checquy and the Grafters struggle to keep themselves from the public eye. I especially love how the arm of the Checquy that deals with disinformation is called the liars.

Stiletto has plenty of action and suspense but truly shines in it’s worldbuilding and relationships. O’Malley has created these two organizations and given us a glimpse of why they hate each other so much. Here, he allows these characters to tell us the stories that has kept fear and hatred alive for centuries. We get to know Felicity and Odette as they struggle to go through the day with each other despite having been taught that the other person is the enemy and should be destroyed. As they struggle to get through the days of the negotiations and unravel the mysteries surrounding the threats presented to this union, we get to know two strong and likeable women. O’Malley gives them such life and personality that it is difficult to not like either of them. They are imperfect creatures that struggle with the fear and hatred and provide an excellent reflection of how this happens in reality and the path out of this loop.

O’Malley takes the time in Stiletto to delve more into the world that surrounds these characters. He does so in a fashion that feels less like exposition but adds to the tension that is building in the story. In particular, I like how we get to know more about the critical battle that sets these two organizations at odds. It, like most battles, starts with one man’s desire for more power and control. The Grafters, eager to show off their prowess, comply with the a request for weapons that could improve the standing of their country. The resulting invasion results in atrocities that leave wounds that are never allowed to heal and passed down the generations on both sides. As the story progresses we get to see the consequences of those past actions played out in the present.

I love this book!

It has solid characters that are easy to love. The villains are not cardboard cutouts but fully fleshed individuals with understandable motivations. He populates his world with diverse characters that are flawed yet trying to do better. It is also the second book in the series and I did not feel like I needed to have read the first book to enjoy this one. I would still pick up the first book, The Rook, and read it as it is wonderful as well and will increase you enjoyment of Stiletto.

So, I give Stiletto four bear paw out of four! Definitely worth your time and money. I can not wait for the next installment in the series.