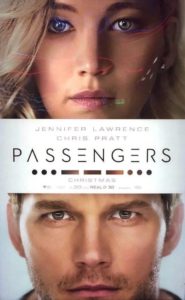 The trailer for Passengers sucked me.

The idea of a generation ship suffering some mishap in space and two people being left to face the darkness and the catastrophe alone is an intriguing idea to me. I have read many stories with this premise. I wanted to see Chris Pratt and Jennifer Lawrence walk around in this type of story.

Passengers provides this story as a backdrop but not the central idea. Pratt and Lawrence are passengers on a generation ship that has suffered catastrophe. The question that is asked is not how do you repair a ship with limited tools but what would you do when you are faced with dying alone out in the darkness.

So, going into Passengers, you are expecting sci-fi action and adventure and are given romance with a touch of soul searching. I am not averse to romance but was not expecting it here.

Pratt and Lawrence, as usual, give excellent performances. Pratt plays Jim Preston. Preston is a mechanic and an engineer who has left earth to find something that he can fix and build. Lawrence plays Aurora Lane, a write seeking to leave the shadow of a famous father and tell her own story. There is no way for these two to not have chemistry on the screen. They move with ease through the simple story they are given and allow the few times that the scripts tries to transcend to shine through.

The cinematography and effects are solid as well. The way that shots are handled both capture the futuristic feeling of the setting while also highlighting the isolation and alienation that such a trip would entail. There are points in the story where Preston is truding through a year alone on the ship and the shots and how they are woven together illustrates the descending madness of facing one’s demise alone and and unmarked can do to someone.

The movie is problematic for me when it comes to this choice moment. Preston is contemplating suicide rather than die alone. He makes a choice and begins researching other passengers. He chooses Aurora and then takes the time to choose whether to consign her to the same fate or live alone.

He makes the choice to have her join him. Thus begins the romance. Pratt is an excellent awkward lothario and the wooing is worth watching on the screen. The problem for me is that this is a horrible choice and Lane’s death is sealed without her consent. the secret comes out and the consequences are there but are impermanent. The ship must be repaired with death on the line. In that moment where Lane could lose Preston, she chooses to want him with all her heart. Lane chooses her murderer/lover and chooses to not die estranged from another human.

Passengers chooses to make normal this horrible decision. It follows the standard romance trope of love conquering all and the woman choosing to take the man back to not feel unfulfilled. It makes my skin crawl.

The writer, Jon Spaihts, could have done better. At minimum, the roles could have been gender flipped. Lane could have been the mechanic that was accidentally awoken by the accident that befell the ship. This would not make the choice any less icky but would have definitely flipped the power dynamic and making for a more interesting exploration of this moral dilemma. The moral dilemma could have been explored more as well. We get a montage of Preston working up to making the decision but the weight of the decision never settles. I wanted to see the weight of that secret come to bear as it was a beat that was left unheard.

We also get a brief flash of another person on the ship as Gus Mancuso, played by Laurence Fishburne, is awoken. He is underutilized as he serves as a tool to give the two a way to survive the ship’s problems as well to highlight what it means to die on this ship with others around you. He even has a line for Lane when she brings up that Preston consigned her to death to make it easier to forgive him. “The drowning man doesn’t mean to drowned you, he just doesn’t want to drowned.”

I was entertained by Passengers despite the problems. I wish it had made some effort to be something other than a standard romance. Exploring the central question and avoiding the common tropes of the genre would have made this a much better movie.

Two bear paws out of four. Worth watching when it comes to Netflix.