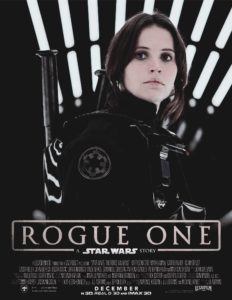 I loved Rogue One.

It hits the same beats for me that made Empire Strikes Back my favorite Star Wars movie.

First off, the movie is gorgeous. It blends practical effects with CGI in a way that draws you into the movie. The opening scenes are just one example. We jump to the planet that is the home of Erso’s. The CGI of the planet from space is breathtaking as one would expect. When the camera brings us the the planet’s surface, the choice of location provides us with setting that is both familiar and alien all at once. The added effects of the farm that Galen Erso has constructed are sparse but build up this idea of an alien sanctuary far from the battles raging across the stars. The Imperial shuttle cuts the sky like an implacable shark intent on it’s prey.

This type of scene is repeated throughout the movie as we follow our erstwhile heroes. The vistas presented are varied and each adds another layer to the scope of tapestry that is the war for the soul of the galaxy. I liked that we are given so many different places. It gives the story both the room to move around as well as lending an grand scale to a story of just a few people.

I love the characters that we are given in Rogue One as well.

Four stood out for me in particular. First was Cassian Andor. In Cassian, we are given an agent of the rebellion that has done many dark things in the name of what he believes in. These things aren’t just stories that he tells us, as we get to see him sacrifice a contact in cold blood to ensure his escape to pursue a lead on Galen Erso. The audience gets to watch as he struggles with executing orders that would have him kill again in order to try and protect the rebellion from the weapon that has been created.

Chirrut Imwe and Baze Malbus are a pair that are found by the heroes on Jedha. These two are the last defenders of a temple that has long since fallen. They are like paladins adrift with nothing to defend and no cause to champion. They are adherents of the force yet not jedi themselves. One still firmly believes in the force while the other trusts in his weapons and his friend. Despite not being a jedi, Chirrut’s expertise with the staff despite his blindness provides us with a character that is force sensitive without needing a jedi. His mantra, “I am one with with force and the force is with me.” is an immediate classic for me. The relationship between the two is also an interesting aside. They present a close relationship between two men without it feeling forced, stereotypical, or sexual. They are just two men whom are best friends and normalizes this type of relationship without any of the macho overtones one would expect.

Finally, there is K-2SO. He is a reprogrammed imperial droid voice by Alan Tudyk. He provides a dose of comedy in what could easily be a dark and brooding movie. Unlike C-3PO, his statements are plucked from the minds of the audience and given voice on the screen. In once scene, Jyn has “acquired” a blaster. K-2SO’s response to this is succinct. “Why is she allowed to have a blaster?” When the decision is made to allow her to keep the blaster, K2 quips, “Would you like to know the odds of her using the blaster on you? They’re high…very high.” Hilarious! and yet, despite being a droid, K-2SO sucks you in with that cutting personality and a soul housed in the machine.

The wonderful and horrible thing about these characters is that they suck you in and make you care about them. You connect with them despite knowing how this ends. And even knowing where this movie goes, Each death is a punch in the gut that leaves you misty-eyed and sad to watch their passing. When K-2SO locked Cassian and Jyn inside the vault so they could continue searching for the plans as his systems failed under the assault, I had tears in my eyes.

I also enjoyed the two appearances of Lord Vader in Rogue One. Both are short but highlight the malevolence and power that is Darth Vader. First we meet Vader in his fortress. The Administrator of the the death star has come in search of his lost power. He provides a report on the capabilities of the weapon and asks to be given control of the station as Vader leaves. The audience gets to watch as the iconic force choke begins and vader states that administrator should, “Be careful not to choke on his aspirations.” The next we see of vader is at the end of the movie cutting his way through rebel soldiers to get to the plans on the flagship of the rebel fleet. He is too late and we get to see him watch as leia’s ship streaks off into the darkness.

I am not blind though. I know the movie has problems. The plot is straightforward and ending is telegraphed. There are bits that were wonderful in the trailer but are never seen on the screen, such as the iconic, “This is a Rebellion, I rebel.” The CGI Tarkin quickly descends into the uncanny valley, especially given how much screen time this character gets in Rogue One. This character is only outdone by the CGI princess leia that just looked weird and felt even more wrong.

Despite these things, Rogue One takes it’s place as my second favorite Star Wars movie. It echoes the things I loved in Empire Strikes back and gives me characters that I come to love and mourn their passing each time I see it on the screen. Definitely four bear paws out of four!