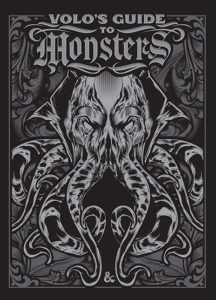 If you have been in the table top roleplaying game scene for awhile, you will have come accross the Monster Manual. It is a mainstay of Dungeons and Dragons and iterates itself across the fantasy genre like a zombie plague from patient zero.

They follow a format that is predictable and leaves one only looking forward to seeing what the artists were able to do with their orders. The variations are organized around settings or play style but rarely provide a book that is enjoyable and satisfying.

Volo’s Guide to Monsters takes a step outside of the lines to try something a little different.

The conceit of the book is that it is a collection of information on the various creatures of the realms gathered by the inveterate adventurer and writer Volothamp Geddarm.

Volo to his friends.

Scattered throughout the book are observations on the various beasts and ecologies from Volo and his longtime friend, Elminster. The tips range from useful ideas for how the creatures could be used in the game to humorous asides on how interactions with the aforementioned creatures went awry.

The change is presentation is refreshing.

The book opens up with a section that talks about the ecologies of several monsters from previous monster manuals. The very first entry deals with an iconic creature of Dungeons & Dragons, The Beholder. The reader is treated to an analysis of how the creature operates and the reasons behind the behaviors that they display. The description of a creature that sees itself as superior to everything, always aware, and yet in a constant state of fear for something trying to come take what it has is interesting. It takes a monster that you drop into a room without thought and gives it a a background and a purpose that is both entertaining and a useful guide in using it in play.

This section covers a large amount of ground in regards to creatures that are ubiquitous in D&D campaigns. In particular, the information presented on the Gnolls and Illithid is enlightening and entertaining. With the gnolls, Their behavior as slavering monster that ravage the countryside is put in the context of being creations and devotee’s of Yeenoghu. Their being is suffused with the savagery and hunger derived from the depths of the Abyss. Rational thought is something that is difficult for the ordinary gnoll to maintain. The illithid are painted as dimensional refugees that have fled their slaves who have risen up to destroy those that had used them so cruelly. Each story provides both hooks to add these creatures into your story, explanations as to why they behave the way they do, and collects information that has been spread over several tomes in previous editions of Dungeons and Dragons.

This book also collects several new options for races for Player characters. In this edition of D&D, player character race options have been few outside of one or two presented in the appendices of adventures. The addition of them here seems a much more natural fit. The options for player characters is increased by seven.  The authors have brought back another favorite of mine from Fourth edition, the Goliath as well as adding in more exotic choices with the Tabaxi, cat people, and Tritons. This section also adds in rules for handling goblins and other monsters as player characters as well. This is something I always like to have as an option and am glad to see it included in this book.

The rest of the book presents more monsters for use in the game as well as collecting a series of NPCs for quick use of any game master. They are exactly what one expects from a book of monsters.

The book itself is gorgeous.

I picked up the special edition which has a black cover with an Illithid on the front and back cover. The book is full color throughout like the previous books for D&D with new artwork throughout. It weighs in at 224 pages with a retail price of $49.95.

Volo’s Guide to Monsters is an excellent addition to the Dungeons and Dragons Library. It goes off script for a Monster Manual and gives the reader a much better read and a much more useful tool. My only quibble is that for $49.95 I expect a bit more page count. Despite this, it is a definite must have for any fan of D&D.

Four out of Four bear paws.