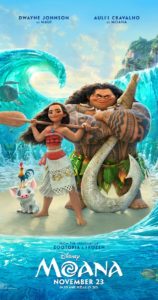 When I learned about Disney’s new movie releasing over the Thanksgiving Holiday, I was sold. Moana was based on Polynesian mythology and features songs written by Lin-Manuel Miranda. Nothing else need be said.

I love mythology. It was my one of the first kind of books I checked out of the school library as a child. I am woefully uneducated on the mythology of the polynesian cultures and Moana provides an good introduction to the subject.

I have also become a fan of Lin-Manuel Miranda’s Hamilton. I listen to the soundtrack several times a week, if not more. The songs he crafted for this show are just wonderful and echo in my head long after I have stopped listening to them physically.

The combination of these things I love is just priceless.

I had my concerns going into Moana, as Disney does not have the best track record at handling these types stories with sensitivity. Pocahontas being the case in point. I can not claim to be fully aware of complaints regarding the sensitivity to the cultural issues that are presented in Moana. If you hear of concerns from polynesian people, make sure to listen as they are better informed than I.  If you stay through to the end credits you will notice a long line of cultural references that Disney utilized to do better in Moana, and it appears to me to show on screen.

Outside of being predisposed to loving this movie for the subject matter and the musical pedigree, Moana is wonderful.

Moana is the daughter of the chief. Moana is supposed to take up her father’s position and lead her people into the future. We quickly learn that her what she is supposed to do and what is necessary are two different things. As a toddler, Moana’s grandmother shares with her the creation myth of the islands. She tells of how the mother island created all the things in the sea and then settle down to sleep. She tells of how Maui sought the mother’s heart to take the powers of creation for himself and in so doing, unleashed a darkness upon the sea.

We get to watch as Moana grows up striving to embrace the role that is set out for her yet still enraptured by the call of the ocean. She struggles to live up to the expectations of her parents while still listening to the songs and teachings of her grandmother. When the effects of the darkness finally encroach upon her island, Moana questions her grandmother and is shown the history of her people that has been hidden. Moana learns that they had been a people that had explored the ocean at great length but had stopped once the voyagers stopped returning. To save her family, and her people, Moana trusts in herself and takes to the sea to find Maui and return the heart to the mother island.

I love that we get a Disney Princess that sets out upon the hero’s journey. I love that Moana keeps moving forward despite the pressure from her father, her people, and Maui telling her that this is something that she can not do. I love that we get to watch as Moana learns the art of Wayfinding from Maui and then use that mastery to overcome the last guardian on her journey. One of the funniest moments for me is when Moana is arguing with Maui on her canoe and he calls her a princess. He walks through a checklist of things that make this so and it is hilarious yet accurate for a Disney Princess.

I mentioned the Lin-Manuel Miranda earlier and would be remiss in talking about the songs. I can hear his hand in each song that is given voice. These songs range from the pop style of “Shiny” sung by the villainous crab to the rap done by Dwayne Johnson entitled “You’re welcome.” Mix into these excellent pieces songs that blend english and Tokelauan language lyrics to create wondrous soundscapes that flow with the animation. A veritable treasure trove of songs that kids and adults alike will be singing for a long time to come.

There were a few things that stood out for me in particular in Moana. I loved that Maui’s tattoos told a story and were themselves alive. They both showed the story of Maui and held him to a higher standard than he himself sometimes adhered too. This was a unique approach to the tattoos and held up the idea that they were badges of honor that sometimes the wearer may fall short of. I also loved that one of the bosses that Moan faced were coconut pirates. They were both cute and fierce and allowed Moana to show her capabilities to their full extent fairly quickly in the movie. They are memorable without overshadowing the main characters which is a delicate balance to achieve. I also loves Hei Hei, the chicken. This is the animal sidekick that Maui talks about and is one of the funniest yet dumbest animal sidekicks in Disney history.

you should definitely see Moana in the theater. The music is wonderful, the action is entertaining, and the story will introduce you to a culture that everyone should know more about.

Four bear paws out of four! I can not wait to see this movie again.