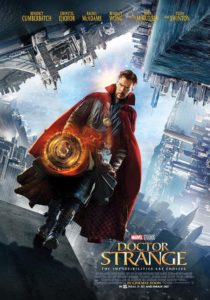 Doctor Strange was one of the most anticipated movies of the year for me.

I love the mystic heroes of Marvel and DC. The movies of each universe have neatly sidestepped the concept of magic and kept it off of the screen. Doctor Strange takes this idea and places it center stage.

I will admit, my expectations for Doctor Strange were high. I wanted to see so much from his backstory make it up on to the screen that it made it nigh impossible for me to come out of the movie rapt in adoration.

I enjoyed the movie but it missed the mark at making me love it.

Doctor Strange does an excellent job of introducing the audience to another quirky character from the marvel universe. Benedict Cumberbatch takes up the mantle of Dr. Stephen Strange with ease. He captures the arrogance and mastery that is a hallmark of Doctor Strange before he begins his journey of discovery. Cumberbatch has no difficulty walking the line between arrogant asshole and master of his craft. He is able to embody a character that is both maddening in his self-absorption and likeable for the way he is willing to help out those that he cares about.

The movie does a great job of presenting Strange’s supporting cast as well. First, I liked that they change the Ancient One to a woman.  In the comic, The ancient One comes with a lot of baggage. These issues are sidestepped to give us a female character that is both powerful and relatable. Tilda Swinton does an excellent job being the enigmatic Ancient One. I also enjoyed the changes made to Wong. Wong suffered from the same treatment as the Ancient One in the comics. He was the long-suffering servant that placed the needs of his master above his own. Here, Wong is a Master of the Mystic arts and defender of the library. He is played ably by Benjamin Wong who provides a an excellent foil for our gifted soon to be sorcerer. Finally, The casting of Chiwetel Ejiofor as Mordo was inspired. He carries himself with such strength and grace that he just radiates power. He dances the line between earnestness and melodrama with style and grace and avoids falling into the stereotypical villain-to-be.

The cloak of levitation was also a pleasant surprise. In the comics, it is just a magical artifact of minor consequence. In the movie, it is a sentient item that has definite ideas about whom should be wearing it and how they are best served. The scene where Strange is trying to retrieve an axe to defend himself and the cloak forces him to make a different choice is priceless. I also loved how it tried to clean his face when he was preparing to get back into the fray and had to be told to stop.

The movie fell short for me in how it treated magic. The many scenes where spells are being cast had beautiful mandala designs but put them to no use. The battles between sorcerers involved running a lot over an ever changing field of battle. The assumption was that this change of environment was caused by magic with the indicator that this was caused by a wizard was that he waved his hands. Why not have the sorcerer in question create an amazing mandala and then incorporate it into the environment? The magical battles were martial arts set pieces. This is fun to watch but why not have magical duels be similar to the things that we have seen in Harry Potter? The effects are beautiful and well done but just don’t seem to capture how magic would be done in the Marvel cinematic Universe, much less how it is portrayed in the comics.

The movie also falls a bit shot in acknowledging where it borrows. The mandalas abound yet and explanation of where they come from and why magic looks that way are in short supply. Taking the time to point out the significance of the symbols used would not have taken any time and been an excellent way of educating the audience.

Doctor Strange was an entertaining movie. It finally brings magic into the Marvel Cinematic Universe and gives us a hero that is trying to do no harm. The performances of all the players are solid and the effects are top notch. A definite three bear paws out of four from this geek bear. If you have a chance, get to the theater to see this movie. Also, well worth seeing in iMax 3D if they have it where you live.