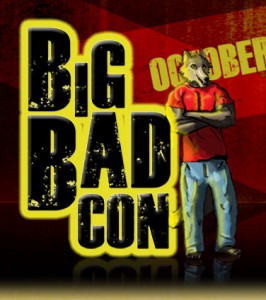 This was the second year that I have attended Big Bad Con.

As I was leaving the convention this year, I was contemplating how to talk about my experience. My feeling about this convention are complex which made jumping right in a bit difficult.

Big Bad Con is both a convention and an experience and I was torn on how best to present this. I’ve tossed out several ideas while I was processing everything and decided to go with talking about it as a convention, as an experience, and as a learning moment.

Big Bad Con stands out from ordinary conventions in many different ways.

The first major difference is that it is centered around charities. The convention supports a local food bank as well as Doctors without Borders. In further pursuit of this charitable outlook, Big Bad Con has become a 501(c)3 organization. This charitable focus starts the convention off in the service to others and this feeling is carried through to everything else at the convention.

The next way that it stands out for me as a convention is the staggered way it allows for game sign-ups. I am most familiar with GenCon which has a lottery style game registration system. You create a list of games you want to play in and submit them when registration opens. What you get is determined by your place in line. thus, some never get any games they want. Big Bad Con’s staggered roll-out of sign-ups allows everyone to get two games in the first session and reserves the teen games for age appropriate attendees. The second wave allows everyone to sign up for two more games. The third wave allows everyone to register for whatever you like. I love this idea! It ensures that you should be able to get at least two games that you have your heart set on.

Big Bad Con also stands out for being an inclusive convention that strives to make everyone welcome. It has a community standards page on the convention website. These same standards and the no harassment policy were posted as a large banner fight in front of the registration desk for all to see. In addition to this, there were pronoun ribbons available at the registration desk to make all feel comfortable when speaking with each others. The convention also designed a social metagame for the convention in the vein of PbtA games. Each play book rewarded convention-goers with experience for getting to know someone, checking in on people, working to make others feel comfortable, and so on.

What an excellent idea!

I also love how Big Bad Con has private game rooms. If you have been to a game convention, you will have been put into a large room filled with tables. Your game will be competing with the conversations of several other games which creates a wall of noise that can be distracting to downright alienating. The private game rooms create the intimate experience of gaming at home at a convention. You have your own space in which to create a game unhindered by the other games around you. This makes the games that more fun without having to exert all the more energy just to be heard by those at the table.

It is a small intimate convention where you have the ability to get to know the people that you are gaming with. There is this feeling of camaraderie that seems to permeate every activity that happens there. I was volunteering this year and worked at Games on Demand and was granted a brief glance behind the curtain as well. As I expected there was plenty of frenetic energy as the staff and other volunteers worked to get things up and running as well as making sure that everyone had a good time. Despite this elevated anxiety and activity level, everyone remained friendly and caring. Sean took the time to check back with me on one of my shifts to ensure that he hadn’t left me feeling overwhelmed or unneeded. This meant a lot to me.

Another way this stood out for me was on Thursday night before the convention began. I had went to Endgame Oakland with a friend and we had returned to the convention hotel to find many games taking place. We did not make it far into the lobby before someone came up to invite to join in a game that was taking place. Being a shy person, It was amazing to be asked to participate in a game. I ended up getting to play in a game of Ravenloft using the Saga system with Renee Knipe. It was a great time and wonderful to get to talk to her about projects she was working on as well as getting to game with her.

These were small moments in the convention but they loomed large for me. They had a large impact as I am a shy individual and always worried that my presence is not wanted or appreciated so I hang back. It was nice to feel included, and accepted.

Big Bad Con also provided me with a teachable moment. At this convention, I see groups that get together and play games. These groups are diverse and accepting of others despite their differences. There are designers here that work to create games that also have this same aim. It makes me want to see this community to the greater hobby as a whole. It made me take a step back to look at the tables that I play at both at the convention and at home and view them more objectively. I asked myself a question, would I feel comfortable bringing someone new to this game? Would the new person feel welcome at the table? At Big Bad Con, the answer was yes. The GM’s running the games took the time to be welcoming and open to other ideas, used lines & veils, and the X card to create a more welcoming environment. I could not say the same for all of my home groups. big Bad Con gave me the impetus to try and change my home games to be more welcoming and inclusive. It also made me want to try and find a way to make the hobby as a whole more welcoming to those of us that don’t fit the stereotypical gamer mold.

Big Bad Con 2016 was once again a rousing success from my perspective. I had a wonderful time with old friends and met new people whom I hope to call friends soon. I was able to play in fun games with a great groups of people. I was able to play games that I don’t get to play at home. I was able to help out at the convention which made me feel like a part of the community. Big Bad Con is definitely a convention you need to get to at least once if you are a gamer and want to feel welcome and include.

Four bear paws out of four from this Geek Bear!