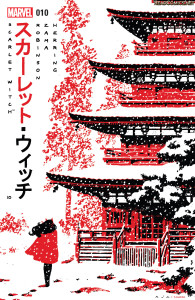 Much like Doctor Strange, I had not mentioned the Scarlet Witch in a while.

After reading the 10th issue in the series, this is something I must remedy.

As always David Aja does the regular cover for this issue and it is stunning as usual. This issue features a winter scene in front of a Japanese pagoda. The title is written in the Japanese style next to Kanji and the names of the creators on this issue. Aja use of three colors to create such striking images is just breathtaking. His simple artistry on these covers makes me wish for lithographs of these covers to hang in my home.

The interior art on this issue lives up to the gorgeous cover. The first page is a simple one page piece. It is a snow covered field with a small fox wandering across the forlorn landscape with a few twigs the only other relief from bright white of the cold snow. A simple haiku is featured in the upper right corner.

The rest of the art throughout this issue has a definite edge to it. The way that Zama does the faces of all the characters, save for Scarlet Witch, adds gravitas to each of them. These are characters with a history that we are only glimpsing a single encapsulated moment. In addition, we are seeing these character as they deal with the grief of losing a loved one which also echoes from each line on a character’s face.

The story of this issue is also fascinating. After the gorgeous opening page, we get to see an aged man writing Kanji while contemplating the things that he has not done. We learn that he has learned of his coming demise and, despite all of his accomplishments, can only worry about what he has missed. Then his fate comes for him.

Wanda comes to Japan to investigate the death of the Aoi Master, Hiroshi Tanaka. She did not know the man but felt his death on the other side of the world. This is a mystery that can not be left unanswered. So, like a good detective, she begins asking questions. Through these questions we learn about the life of the Aoi Master and what he meant to this part of the world and these people. His loss has left a whole, but the hole also is a clue. Wanda learns sometimes it is the piece that is missing that provides the answer as opposed to finding the piece itself.

I’ll not spoil the ending for you.