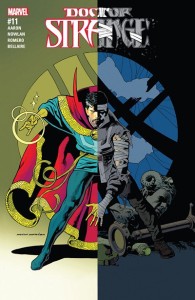 Issue Eleven picks up after the Fall of Magic storyline. The Empirikul had swept the earth destroying as much magic as it could. Many masters of the mystic arts and seats of power were destroyed in their wake. In the final battle, magic was able to survive by Doctor Strange accepting that he could no longer proceed in the way he had. He had to accept the mistakes of the past as well as their consequences.

This issue begins with Stephen meeting with dealers in a back alley. They are peddling mutant growth hormone. Doctor Strange is attempting every avenue to find a way back to his former power. This last ditch effort ends even more poorly than all the others. He is left for dead in a dumpster, only to be revived by the touch of an ethereal watcher that appears to be the Ancient One. Stephen returns home where his librarian, Zelma Stanton, is working at discovering which spells work and which don’t in this new age of magic. He then goes for a walk to see how the city fares since the threat has now passed. The imagery is of a much more subdued magical environment. Subdued, but not safe.

Unlike earlier issues, his attempt to assist a passerby suffering from a magical parasite ends poorly and he returns to his now dilapidated Sanctum Sanctorum to better arm himself. As he attempts the rescue again, we are treated to a flashback. Stephen is offered an elixir by Mordu to heal his hands. Stephen refuses and violence ensues. He then returns to the Ancient One to begin learning. Stephen picks himself up and returns home to recover and begin learning magic again in this world after magic was pushed to the brink.

The art in this issue is good. Nowlan and Romero do an excellent job at capturing the rough and beat down look of a world that is recovering. I like how the give a desperate and battered appearance Stephen throughout the book, even in flashback. In particular, I like how they handle the last page of the issue. We return to the bar with no doors for the reveal of the next big bad. They bring Mordu out of the darkness without bringing him fully into the light. I liked how they accomplished this.

Issue 11 does an excellent job of wrapping up the Fall of Magic storyline. It sets up a new status quo while still maintaining the weirdness factor which I came to love from the first issue. The art is good but is a bit outside of what I enjoy seeing in superhero comics. A solid three bear paws out of four. Well worth a read for comics fan as well as a nice series to help you get ready for the movie.