Every year at GenCon I stop by the Paizo booth and talk to someone about what is new at Paizon. I never have set up an actual interview. Instead, I would use the hour early entry into the vendor hall as time to talk to one of the people that works the booth about the new release at GenCon.

This year I decided to take a different tack.

When you are approved for a press badge for GenCon, you begin receiving email from the various publishing companies that come to the convention. One of the emails I received which caught my eye was the ability to request an interview with Paizo. I initially did not send in a request as I did not think that I would get accepted to interview someone from Paizo as my site is both small and niche. I finally decided to put in a request and was given a time on Sunday afternoon to speak with F Wesley Schneider.

This would be my second scheduled interview with a designer ever. So, I definitely had RuPaul’s line from Drag Race running through my head.

Wes Schneider is the Editor-in-Chief at Paizo, co-creator of Pathfinder, author of many of the Pathfinder game books including the new Horror Adventures, and author of the Pathfinder novel, Bloodbound. Wes is also one of the panelists on the Queer as a 3 sided die seminar at GenCon.

I don’t record during my interviews, I take notes. So any errors in information are my fault due to poor note taking or poor handwriting.

I arrived early to the Paizo booth on Sunday, the last day of Gencon 2016 because I am that guy. I took my time to wander around and look at all the neat things that were available from Paizo. My favorite purchase from past GenCons has been the Mythic Adventures book. A book that is right in my wheelhouse. The Mayfair booth across was having a final gathering of their gamers and were giving away many things so that the space right behind where the interview would be happening. The nearby space was filled with people and raucous with excitement.

Wes was very welcoming and let me know that he had checked out my site that morning. He mentioned that he remembered me from the Queer as a 3 sided die seminar earlier in GenCon. The Mayfair event that was going was very loud so we moved out into the hall by the Vendor Hall to make it easier to speak. I made to let him know that I appreciated the Queer as a 3 sided die event here at GenCon and explained that it was one of my first public events after coming out. I also gave a brief description of my connection to Pathfinder.

I know. This was most probably not the most professional thing to do but I wanted to say thanks and share how much I enjoy Pathfinder.

I was very interested in Starfinder. I have been wanting to play a science fiction game for some time and was happy to hear that Paizo would be launching something in the genre. I asked Wes which genres of Science Fiction that Starfinder would engender. Would it allow for play in the styles of Star Wars, Star Trek, Firefly, or all genres. According to Wes, Starfinder is smaller project that will have the Pathfinder world integrated into it. Starfinder will have it’s own aliens but will hit on tropes like the strong warrior race. By virtue of integrating the Pathfinder world into it, Starfinder will be a blend of science fiction and fantasy but will not just be an add on like in Spelljammer. Wes stated that the designers tried to answer the question, “What would the golarion be like if it was able to reach the stars?” Starfinder would be Golarion 3000 years in the future. I enquired if Starfinder would continue in Paizo’s path of diversity within its work and Wes said that it would.

I asked Wes about his first novel for Paizo, Bloodbound. He stated he was very worried about writing a novel for the company that he was kind of the boss of. He made sure he worked his way up through the fiction process. Wes stated that he had pieces in several of the adventure paths including Guilty Blood and Carrion Crown. According to Wes, Bloodbound is a dark fantasy set in Ustalav. The two main characters are Larsa, a dhampir vampire hunter, and Jadaine, a priestess of the death goddess. The two are working together to maintain and age old treaty between the vampires and the humans to keep the city safe. Wes stated that the question that underlies the story in Bloodbound is, “How would Dracula react if Van Helsing stopped pursuing him?” Wes stated that he enjoyed getting to use Ailson Kindler, Golarion’s Bram Stoker, as well as Considine, The smug self-important bastard of a vampire. Wes gave the impression really enjoying get to write these characters and play with this idea in Bloodbound. His love for the book was infectious and definitely made me want to read it.

I followed up with a question about why the diversity in Golarion was something seen in the campaign setting but not in the actual rules books. Wes stated that at the beginning, the rules books were designed to be a toolkit. You take the rules and play in whatever fantasy setting that you wished. The elves and dwarves in the main rule books were meant to be stock fantasy tropes. It was when you got to the adventure paths and setting books that the true flavor and diversity of Paizo would shine through. Wes explained that from this starting point that Paizo has maintained this separation. It has caused some minor confusion when they would release a race book for the Inner Sea region and it would struggle to find traction when readers would assume it was just another elf book as opposed to giving you the society of these peoples in Golarion.

I asked Wes what would be a good starting point for someone like me that had not played an adventure path. His suggestion was Strange Aeons. According to Wes, this path starts in Ustalav and deals with the tropes of cosmic horror. He pointed out hat it has many H P Lovecraft characters scattered throughout. The initial attack of the path is that you are locked in an asylum and are seeking sanity. Wes states that it allows you to start at level one and go follow it through to high levels.

An interesting idea that I am going to have to try and play through. 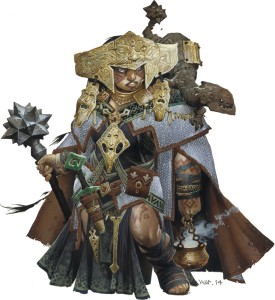 I closed the interview by asking him what was a question that he wished I had asked. His answer was, “What are his favorite three queer characters in Pathfinder?” Wes listed Shardra, the trans dwarf shaman. He stated that Crystal Frasier created the tradition for what a trans dwarf is in Golarion. Wes mentions Shardra often in the Queer as a 3 sided die seminar as well. The lack of a trans character in Pathfinder was something that Shardra helped fix and has done an admirable job. Wes moved on to mention Merisiel and Kyra from the Pathfinder comic. He stated that he loves that these two are in a relationship in the comic and that it isn’t simple or reductive. He states that they have their ups and downs yet it still feels authentic. Finally, he loves Considine, the queer vampire from Bloodbound. Wes states that he loves that he got to write a character that was such a bastard yet still not a stereotype. A character that you just hate but love at the same time.

It was great to speak with Wes Schneider about Starfinder, Bloodbound, Pathfinder, and diversity. He was warm and cordial and fun to talk to. His energy and enthusiasm about Pathfinder, Starfinder, and the characters that live there was astounding and infectious. I had a great time speaking with him about all things Paizo. I have a copy of Bloodbound and Horror Adventures and expect a review of these books when I finally get to finish them.