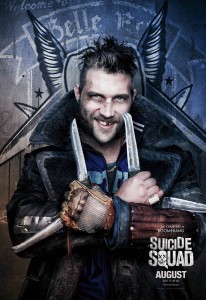 I have seen Suicide Squad twice and have to say that I love it.

I went in with a bad attitude as I had not enjoyed Man of Steel or Batman Vs Superman. I knew very little about this title as I had read very few of them in my time with comics. Which made this a surprising movie when I ended up loving it.

If you don’t read comics, this may not make sense, but Suicide Squad is an excellent first issue. It provides a fully self-contained story. There is a broad introduction to all of the characters in play. The movie sets the stakes by which the game will be played and leaves the audience with more questions than answers. The questions are interesting and the answers have an emotional resonance that gives them some weight.

In addition, Suicide Squad makes good use of some of the stylistic elements that are present in other superhero media. The movie gives a nod of the head to the TV show Arrow in that the exposition is done in the form of flashbacks. We get to see how the members of the team are collected in this manner as well as learning the origin of Harley Quinn. The movie also takes a page from Guardians of the Galaxy and makes excellent use of music to highlight the action. In the same fashion as Guardians, the choices made are just perfect and created an instant connection for me with the movie.

The performances of the actors and actresses are all solid. Viola Davis and Margot Robbie are two of the standout performances of the movie. Viola Davis takes on the role of the Hard-nosed, Morally-ambiguous Amanda Waller and makes you fear this woman who would control this band of killers. Margot Robbie provides us with our first live action version of Harley Quinn and she knocks it out of the park. Unlike the versions we get in comics and cartoons, Harley is a fully participant in the madness and mayhem that surrounds her and the Joker. Robies performance is filled with emotion, cuteness, madness, and scary insights. Everything one would want from Harley Quinn.

There are things that you pick up throughout the movie that are small but powerful.

One of these is the theme of love that is threaded throughout. Amanda Waller is asked how she is going to control this band of misfits. Her answer is to apply leverage. This leverage is the love that each of the main characters exhibits. Deadshot loves his daughter. In the flashback to how he is captured we get to watch this love in action as he fights Batman in the streets of Gotham. Harley Quinn loves the Joker. We get to see this love develop and strengthen in the flashbacks to her origin. This drives her to cooperate in the hopes of being reunited with him while on the outside on the job for Waller. We also have the love that Flagg has for Dr. Moone. Really, there are few characters that aren’t touched by the this underlying theme in someway or another.

I also enjoy the not-so-subtle way that power disparities are pointed out in the movie. In the scene where we get to watch as Amanda Waller pitches the Suicide Squad to the Joint Chiefs, she is one of the few women in the the room and also one of the only persons of color in the room. Yet, she is the one holding the most powerful weapon in the room which is also one of the other women in the room. Another way this is pointed out is when Waller and Flagg enter into Belle Reve prison. The guard that greets them begins to provide all the information to Flagg. He interrupts to let the guard know that he should be directing his ass-kissing to Waller. This then gets flipped when Deadshot is naming his price for working for Flagg. He goes on at some length to only then point out that he wasn’t talking to Flagg, but to his boss, Waller.  The finally twist on power is played out by Diablo. He sits in a horrible cell as Waller makes her pitch. He knows the power he wields and that they just want to make a weapon out of him. He has played that game before and knows the price that is payed for that power and is terrified that the price could still go higher.

Despite my love for the movie, it does not blind me to it’s flaws. The story is simple with little meat on it save what is provided by the characters. The trope at it’s center is overdone and makes me wish that we will see less super weapon scenarios play out in future movies. I know this will not happen but one can hope. The large number of members of the squad makes it so that very few of the members get more than a cursory treatment. Killer Croc, Katana, and Captain Boomerang are all under explained and under utilized. The write provides a unicorn toy for Captain Boomerang which seems like a poor attempt at copying Deadpool. There also seem to be points where the editing was rushed as in where Captain Boomerang leaves when given the chance by Flagg and then later rejoins the team for the final assault. It feels like there was explanation in there but that it just didn’t get to the final cut.

You also know whom on this Suicide Squad isn’t going to make it out of the movie alive without really trying.

Suicide Squad is definitely a four bear paws out of four movie. It is a look at a different type of relationship between Joker and Harley Quinn. This is a DC movie that presents villains as people without the angst and morality overwhelming the action and comedy of the situation. It tucks in some social commentary without it being noticeable to those who came to see a regular action movie. I hope that DC can take some lessons from this movie and incorporate them into future movies in the DC Cinematic Universe.