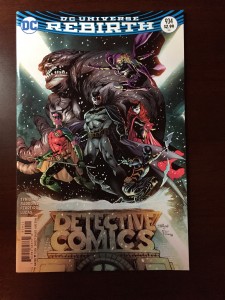 I listen to Funny Books with Aron and Paulie and heard them talk about the Rebirth edition of Detective Comics. Their glowing review peaked my interest. I had another friend talk to me about the upcoming Batman stuff which pushed me over the tipping point and picking up issue 934.

I was not disappointed.

The issue starts with a bang. It presents us with imagery of Batman beating down Azrael in his own church. The fight is quick and brutal but is interrupted by the arrival of…Batman. When Batman asks Azrael who did this to him, he does not like the answer.

Cut to BatWoman swinging across Gotham.

After arriving home and unsuiting, Batwoman is visited by Batman. He wants her help. Whomever is masquerading as him has been watching the vigilantes of Gotham. The younger generation of heroes in Gotham are not prepared for this and he wants Batwoman to train them, prepare them. What follows is quintessential calling of the heroes. Batman and Batwoman gather up the Red Robin, Spoiler, Orphan, and Clayface and begins to train them to better survive the coming confrontation.

There is so much to love about this book!

The art is gorgeous. The two pages of Batwoman swinging across gotham is a sight to behold. The sense of action is well done, the attention to detail on her costume is nice. I love the background as well with the dirigibles and the bat signal playing across the old style buildings of Gotham. Another good example of this is the page where Batman and Batwoman have gathered all the players together. The two flank the bat signal as the large page with three panels inset showing the faces of the new recruits as they are given the spiel of what is about to happen. Simply stunning.

The story is wonderfully as well. One of my favorite parts is the meeting in Batwoman’s place. I like that Batman has come to her for help. He points out what he has discovered and the need for training the other vigilantes of Gotham. Batman has to reassure Batwoman that he does not mean her and admit that he does not have the skills necessary to train a group of people. When Batman removes the cowl to show how much he trusts her, I love that she already knows. I also love how they bring Clayface into the group. He is sitting in a theater watching one of his old movies and lamenting everything he has lost. The two offer him a way to regain some of what he lost. The catch? He just has to do what they say.

This is a story that is definitely in my wheelhouse. I like the idea of following Batwoman as she works with the next generation of heroes in Gotham. I like the idea of Clayface working towards redemption. I appreciate a bat book that takes the disparate characters that populate Batman’s world and puts them into something that resembles a team. I love that the lead in this book is Batwoman and she is being written as smart, aware, and powerful.

Detective Comics issue 934 gets four bear paws out of four from me. Great art and a wonderful story with interesting characters. I am looking forward to reading the next issue!