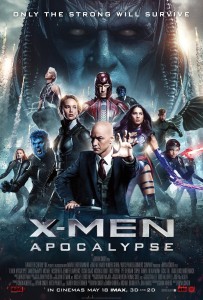 If you have not guessed, I am a fan of comics and superheroes. I knew that I was going to see X-Men: Apocalypse as I had enjoyed the last two X-Men movies. What I wasn’t sure of was whether I would enjoy it or not.

After seeing X-Men: Apocalypse I would say that it was enjoyable but just okay.

I know that doesn’t seem to make sense so let me explain.

I enjoy a good action movie and X-Men: Apocalypse delivers on this part of the bargain. There are spectacular fights that range from intense two person battles to combats that range across several city blocks as well as the vistas of the mind. The effects are done well and the choreography is what I would expect based on the first two movies in this new X-Men canon.

In addition to the fast paced action, we get good performance from James McAvoy, Michael Fassbender, and Jennifer Lawrence. Each of these actors have stellar acting chops and even when the writing is trite and lacking in originality, these three are able to give their characters life that elevates the characters that we are watching on the screen. In particular, this movie provides us with another Magneto redemption storyline. Fassbender gives a depth to both Eric’s desire to form a family as well as heat of his rage as it is all taken away from him. Lawrence provides a similarly powerful performance as the lone woman working to save the lost mutants that have been forgotten.

These same strengths point out the failings of the movie and keep it from being anything other than okay for me. Each of these scenes, and a few others are good to watch. They just lack a cohesive connector that maintains the level of investment I made to the surroundings scenes. Apocalypse could be an incredible over-the-top villain but what the audience is given is a character that seems to be attempting to make an impression with minimum effort. It felt like a Oscar Isaac was wasted in the role as he was not allowed to be bold and outrageous as one would want from Apocalypse.

the movie also inundates us with origins. We get Storm, psylocke, Nightcrawler, Cyclops, Jean, and further looks into Wolverine’s past. Each story is interesting but feels like a distraction from the big tent pole that is taking place in the background. It felt much like playing Final Fantasy 7, all this time is spent raising chocobos to get Knight’s of the Round when supposedly the clock is ticking down. It takes away from the drama and adds little to the overall theme of the movie.

I give X-Men: Apocalypse two bear paws out of four. It is a collection of vignettes that are entertaining on their own but point out the lackluster quality of the movie over all. There are several good performances that aren’t able to lift the rest of the movie from mediocrity. Definitely worth waiting for Bluray to watch in the comfort of your own home.