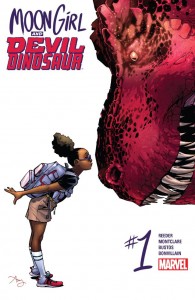 A little while back I heard about a new book from Marvel entitled Moon Girl & Devil Dinosaur. I was intrigued. I remembered the big red Tyrannosaurus Rex from my early days of reading comics. I knew nothing about Moon Girl but I was in for the first issue.

Moon Girl & Devil Dinosaur is currently on issue six and I can not wait for the next issue.

It tells the story of Lunella lafayette, A little girl that is too smart for her elementary school classes and gets picked on by her peers. In addition, she carries the genetic markers that would turn her into an Inhuman. With the terrigen cloud swirling randomly about the world, she is seeking a way to cure or protect herself from the change. Devil Dinosaur enters the picture as he interrupts the Killer Folk in the past as they try to use a Kree Omni-Wave Projector. In the fight, Devil Dinosaur, the Killer Folk, and the projector are sucked into the future. What follows are the misadventures of Lunella as she tries to acquire the Omni-Wave Projector in the hopes of saving herself from a terrigen-triggered transformation.

There is so much to love about this book.

First, Marvel is giving giving us another female superhero with their own book! Lunella is a super genius. She recognizes the Omni-Wave Projector for what it is as well is consistently bored at school as she is way beyond the lessons that elementary school is teaching. The book shows how she is brave in the face of rampaging red Tyrannosaurus Rex and still struggles to meet the requirements of school and her parents while pursuing her heroic goals. My favorite part was when she finally takes up the role of hero in earnest. She dons her costume and gadgets heads out to rescue Devil Dinosaur. Destruction ensues! 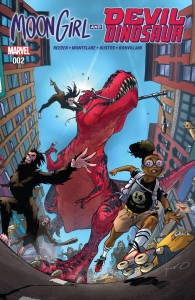 Also, I love that Reeder and Montclare are honest in their approach to Moon Girl. Lunella is a brilliant female of color in elementary school and is not challenged. They show how the school sees her as more of nuisance and does nothing to encourage her learning. They also show how her parents are both proud of their wonderful daughter but confounded by her precocity and willfulness. I love how these two make Lunella so self-aware. There is a poignant scene where Lunella is contemplating how smart she is and yet in the Marvel Universe there are so many super-intelligent people that it makes it hard to be noticed. As she ticks them off in her head, she illustrates how male dominated the line up really is. They bring this problem into sharp focus when the Hulk shows up to deal with Devil Dinosaur. He is condescending and dismissive of anything that Lunella has to say and literally lifts her up to end their conversation which enrages Devil Dinosaur. Typical.

Finally, this book is filled with beautiful artwork. It captures a sense of wonder and hope. Natacha Bustos does an excellent job of capturing both the world around our two title characters. The backgrounds are drawn in a way that invites exploration of the page. The characters are vibrant, energetic and filled with personality that leaps from the page. The actions sequences are crisp and flow well with the story that is unfolding. Bustos’ art captures the courage, excitement, and joy that is an integral component of this book.

If you aren’t reading Moon Girl & Devil Dinosaur, you should be. It is one of the better Marvel books out there. It captures the hope and fun that used to be the heart of superhero comics without giving up on the deeper issues of the world. It gives young girls and young girls of color a hero that they can identify with as well as saying it is okay to be smart and pursue your dreams.