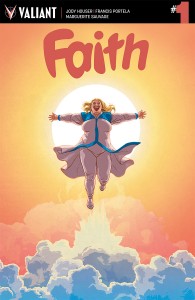 I love comics. In particular, I love superhero comics. They are the modern myths that sing out to my soul. This does not mean that I do not see the flaws inherent in the system. One of the things that you will notice in comics is a definite lack of diversity. Lots of straight white male heroes saving the day. The female heroes are few and far between. These female heroes are all drawn in a way that their male counterparts are not. So, I remain on the lookout for exceptions to the rule.

A recent exception to this rule is Valiant’s Faith. In this title, Jody Houser, Francis Portella, and Marguerite Sauvage give us a look at a female superhero that defies the norms while embracing the tropes of the superhero genre.

Faith is the story of Faith Herbert. She was orphaned at young age when her parents were killed in a car accident. She was raised by her grandmother and found solace in comics, science fiction & fantasy, and all things geeky. As a teenager, her latent psiot abilities manifested and she joined a group called the Renegades. Now, she is out on her own and exploring her own life and powers. 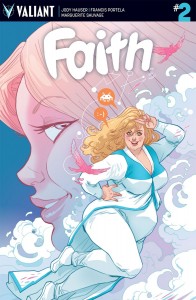 Faith is a four issue mini-series with an ongoing series planned at the mini-series conclusion. I seriously hope that Valiant does this as I love Faith!

You need to be aware that Faith is a full figured woman which is almost unheard of in the comics industry. When it does occur, the character is always the but of jokes and treated poorly. In Faith, we get to see a woman embracing her own powers and starting to chart her own course. Faith struggles with creating and maintaining a secret identity, dating and dealing with past relationships, as well as bad guys that have no compunctions about trying to kill her. the creative team does an excellent job of making Faith both relatable without being condescending or glossing over the everyday issues that people face. They acknowledge that she has left her group and her boyfriend behind. They have her deal with setting up her own life while still maintaining a heroic identity. They play with the idea of her flirting with her new contacts and trying to find that someone that will fit into her new life. They even bring the ex-boyfriend into the story so that she has to deal with some of the unfinished issues that are hanging about. 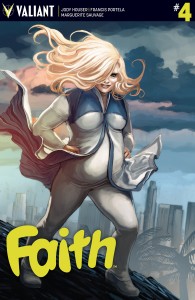 The art on the book is great. Sauvage and Portella create the feel and look that I enjoy in a superhero book. The lines are clean and the colors are vibrant. She handles action in a fashion that you never lose track of what is going on and it never has a muddy feel to it. The powers on display are handled with care and done in a fashion that you understand what is going on.

Faith is an excellent series which I recommend you going out and picking up. It is a book filled with optimism which is somewhat lacking in superhero comics currently. The main character is a welcome addition to the heroines whom have graced the covers of comics over the years and one I hope we get to see more of. My fingers are crossed for the ongoing series!