Thoughts from a run: Flying Pig Half Marathon 2016 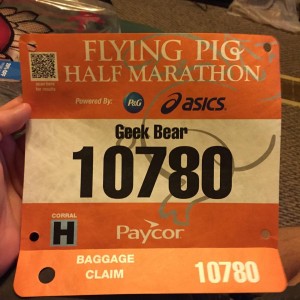 This past weekend I did something that I had not done before. I ran a half marathon. One of my hobbies is running. I do it to stay fit and in an effort to keep the weight off. I am a bear, just not as big a bear as I could be because of running.

One of my goals  I mentioned in an earlier post was to run a half marathon. So, I went out after that post and signed up for the Flying Pig Half Marathon in nearby Cincinnati. I admit that I was terrified to do it as 13.1 miles is a distance that I had never ran before. The longest race that I had run was a 10K. I had been able to do it with a time of one hour and eight minutes. It was fun to do but not an easy accomplishment. I was committed though and put my money where my mouth was.

I was not prepared.

Don’t get me wrong, I trained. I was able to do an eleven and a half mile run in two hours and twenty minutes. I just was not prepared for the course that I was about to run, the emotions that are presented on the course, and the amount of people at the race.

My training course took me around my neighborhood. It is hilly but these hills would be considered small and rolling. They were difficult but not bad. The course for the Flying Pig Half Marathon meanders up one of the seven hills that comprise the city of Cincinnati. I was surprised to discover that this hill stretched for over two and a half miles. Sweet spaghetti monster was that hard! I was in no form to run that distance uphill. It was like getting repeatedly kicked in the legs and I ended up walking up the most of that hill. Of note, this is not the only hill of the race, just the biggest and longest. The race crossed several bridges and one does not think about bridges as hills when in a car. Run a few bridges and you will know the fuckers definitely qualify as hills. I did it though and was able to complete the race with a time of two hours and thirty-eight minutes for a pace of 12:09 per mile. My goal was three hours and I beat it!

The number of people at a half marathon/marathon is staggering. The largest race I had attended was the Thanksgiving Day 10K which had about fifteen thousand people attend. I think the estimates put the attendees at over thirty thousand for the race. This means that you start the race from a corral and your start time is staggered. Being my first race, I was in the last corral and got to watch the waves of people leaving the starting line. It was impressive. The sheer press of humanity was daunting for me as I am a shy person. the corrals force people to be elbow to elbow and I was constantly apologizing for bumping into someone. The variety of people was amazing as well. The other races I have attend had made me feel that races were a very homogeneous activity and the Flying Pig made me see that this doesn’t have to be the case. I was also impressed with how nice the people were as well. I was lost trying to find my corral and people answered my questions and helped me find my way. I think I saw only one sour note while waiting for the race. A nice gay couple were talking in front of me as the national anthem started playing and a lady rudely asked them to be quiet and for them to remove their hats. She patently ignored the other couples right next to them who were talking as well and both had hats on. It happened so quickly and both the lady and the couple moved off in the crowd before I could say something.

Finally, nobody tells you about the emotions that are going to hit you while you push yourself to achieve this. It creeps up on you as well. The thing is that there are all these people lining the race course. There are people that are there cheering on their friends or relatives. But that’s not all. There are more people lining the way to just cheer you on. At the starting line, it it nice but you have your physical reserves still available to keep those emotions in check. Run a few miles and those people touch you and any nerves you might have. Several times throughout the race there were people holding up signs and cheering. Their signs said, “Howdy stranger! I don’t know you but I am so proud of you!” Fuck! Just thinking about seeing that sign out there on mile ten is 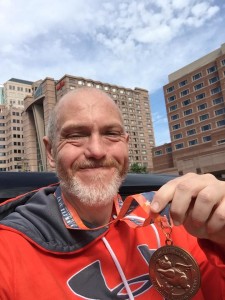 Me and my piggy medal!

leaving me misty-eyed as I write this. You run out of energy to keep the emotions in check and those signs just punch you right in the feels over and over. For me, it was rougher as I didn’t think I had anyone one waiting to see me cross the finish line. So, those signs were reminders to me of this as well as pointing out that people did care. So, there were points on the course were I am sure I was crying. Turns out that as I crossed the finish line I was able to check my phone as I had received some texts while running but had not effort to spare to check. My best friend Stacy had been able to come down and watch me finish the race and got some video of it. Ugly crying…flat out ugly crying.

Over all the flying Pig Half Marathon was tremendous experience. The race organizers and volunteers did a great job and I felt very welcome at the event. The other racers were nice and fun to be around. The crowds that lined the route were heart warming and tear jerking at the same time. If you are a runner and are able to do a half marathon, I say do it. It is a peak experience that you will not regret.

This geek bear does not regret running it!