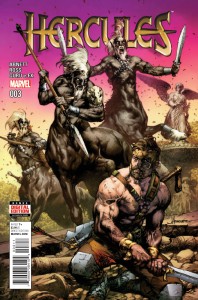 Hercules is another book that fits well into the magical theme that I have been following recently.

This new addition to the Hercules mythos is being written by Dan Abnett with art work by Luke Ross. Hercules has a storied past in the Marvel Universe with a reputation for being a drunken womanizer that causes more damage than the help that he purports to offer. Abnett capitalizes on this past and spins a classic story of redemption mixed with the modern idea of re-branding.

This current story arc opens with Hercules having set himself up in a regular apartment in New York City. He has a land lady that is gives him life advice about being among the regular people. He also has a roommate, the immortal Gilgamesh, that has fallen on hard times and is in need of a role model in this modern age. Hercules is working hard to be a better hero. He is adapting to modern times and using modern tactics and weaponry. He has done this both to better understand the time he lives in as well as cut down on the wanton destruction that has continually followed in his wake.

As the story unfolds over these first few issues, we learn that creatures from various myths and legends are fleeing their old haunts and looking for sanctuary wherever it may be found. This has led to the many encounter that Hercules has had to deal with recently. Each one speaks of a coming”Storm” that is driving out the old. These pronouncements are much like any prophecy or clue, duly enigmatic to fit in with the mythological aspect of Hercules. It requires consultation with blind Tiresias for Hercules to learn that the coming storm is referring to a modern pantheon that is arising and seeking to supplant the old.

I love what Abnett is doing with Hercules. It taps into the style of stories that were told around the Greek Myths. Everyone knew the stories, to make them interesting and memorable the tales were altered in the telling. This allowed the core of the characters to remain while the stories themselves adapted to the time and place of the telling. I love the idea of a demigod striving to change the image that he has created with the idea that his legacy can be eternal and that he cares what that legacy can be. It takes a Greek hero that was not very heroic in the myths and wasn’t all that great of person in the recent past and puts him on a quest. It hits the classic beats of the heroes journey but does it in a modern fashion which is refreshing.

Abnett is also creating a supporting cast for Hercules that is interesting and solid as well. In particular, I like Sophia and Gilgamesh. Gilgamesh is the friend that holds up the mirror to Hercules. Gilgamesh shows what Hercules was and what he could be again if he gives up on this new path. Instead of being a flat caricature of Hercules, he has his own goals and motivations that are spooling out in an intriguing fashion which makes me want to know more. Sophia is the strong land lady that provides a tether to mortality for Hercules. She helps him wander through the process of changing his reputation with the world as well as how to be a better person all around. She does this while still having faults and foibles like the rest of us.

Luke Ross does an excellent job on Art. His style has a rougher edge that goes a long way to making Hercules accessible. It takes the mythic themes and makes them feel more grounded. The action sequences are crisp and clean making the fights sequences easy to follow. He takes the story that Abnett is creating and brings it to life with ease.

I am enjoying Hercules very much. The books provides a new twist on an old favorite character. The story is well done and I appreciate that it is following in a similar narrative vein as Doctor Strange and Scarlet Witch. This book is an excellent addition to your pull list.

I give it three bear paws out of four and am looking forward to the next issue.