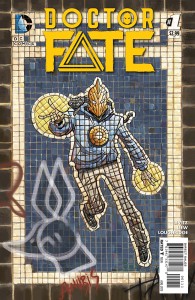 I’ve decided to try and maintain the magical theme for a bit when it comes to comics.

This week I am jumping aisles and talking about a book of the magical persuasion from DC Comics. In the DC continuity, there are many minor characters that are touched by magic. The new 52 had a cadre of mystical characters that comprised Justice League Dark but the title has went the way of the dinosaur. Also, none of the characters that graced the team were ever on my favorite list outside of John Constantine.

For DC Comics, my favorite mystical hero was by far Doctor Fate. The shiny helmet, the sleek costume, the Egyptian mythology blended with lords of order and chaos was a heady mix. There were multiple incarnations of Doctor Fate, a married couple, a prisoner in the helmet, and even a knife fighter with mystic bandages. I enjoyed them all. When I saw a preview for the new Doctor Fate, I knew that this would be a title that I would pickup because that is how I roll.

The creative team behind the new book is Paul Levitz and Sonny Liew with occasional guest artists. Paul Levitz has worked in the comic industry and has worked on one of my other favorite titles from DC, The Legion of Superheroes. In this new iteration of Doctor Fate, Levitz has taken the time embrace the Egyptian heritage that has been a part of Doctor Fate and placed it front and center. Anubis has decided that the world must be punished and has set about to destroy it with a flood of epic proportions. To save the mortals, Bast intervenes and leads someone with the blood of pharaohs to take up the helm of Thoth.

Khalid is destined to take up the mantle of Doctor Fate. He is a child of two worlds. His mother is American and his father is Egyptian. He is new med student who is trying to decide between the woman who is attending med school with him and the one whom protests the treatment of Egyptian and others of middle east descent in America. He is a man of science that is faced with the unbelievable and granted the ability to see behind the curtain of reality and given the chance to make a difference. His world is turned upside down by the new power and his adviser, Nabu, isn’t the most helpful spirit.

I love the new direction that Levitz has taken with Doctor Fate. Khalid is a character that straddles many worlds which is a trope that sits well with any practitioner of magic. The world of his mother and father are very different places. Both care for him deeply and give him the love and support that he needs, but each world has it’s own rules and requirements that place conflicting constraints upon him. These same ties can be seen in his struggle to come to grips with the gods of Egypt visiting a plague upon the earth as well as trying to stop it. DC Comics is known for making horrible mistakes when it comes to diversity in it’s titles but Doctor Fate is showcasing that they can get it right if they stop trying so damn hard.

Sonny Liews art work provides wonderful support for the the story that Levitz is crafting. Khalid is charged with healing the world. His first task is to pull the world back together that Anubis is unraveling at the edges. Liew’s art has that rough around the edges look that lifts up this idea that the world is struggling and in pain. The dark hues that haunt the storm that is descending upon the earth throughout the story is both brooding and anxiety-inducing. It gives the feeling of an electricity that is running under the surface to reflect the conflict that is building in this first story arc.

Doctor Fate is currently at issue number nine and I am enjoying each issue. I am keeping my fingers crossed that DC doesn’t cancel this title as they are doing something good here that I would like to see more of in the DC Universe. If you aren’t reading Doctor Fate, I recommend giving it a read.

I certainly give it four bear paws out of four!