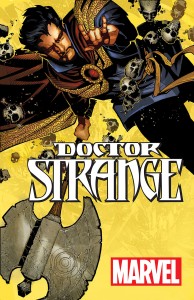 It should be apparent by now that I am a fan of the fantasy genre. Magic and things occult are ideas that will always garner my attention. In the past, I would read any of the mystic heroes from Marvel or DC. The sad part was that these books rarely lasted long.

The long famine of these types of heroes and stories has ended and one of my favorite characters has their own book again, Doctor Strange.

I will admit that I am unfamiliar with some of the backstory that has built up behind my beloved hero. I have not read much of the books that he has appeared in prior to getting his own book. I knew that the write Jason Aaron had done an excellent job with Thor in his recently and trusted that his writing would allow me easy access to this story.

I was not incorrect in this assumption.

Aaron gives a wonderful explanation of magic in the Marvel universe in this book. He explains it as more of a piece of reality that not everyone can see or experience. There are things that dwell in and around us that are just as natural as the bacteria in our stomachs and just as useful. There are also things that are not so beneficent and plain just don’t belong here. The story that Aaron weaves in these first few issues explore facets of the character that I have wondered about before. He not only allows us a peek inside the mystical community of the current Marvel universe but he takes us inside the Sanctum Sanctorum. These early issues show the audience more of the workings that keep the sorcerer supreme running than I was previously aware of…and it’s awesome!

Layered on top of this Better Homes and Gardens view of Doctor Strange, is the more important story. This is the assault on magic which also ties in well with theme that appears within the pages of Scarlet Witch. The Sorcerer Supreme’s of other dimensions are all being murdered and their realms stripped of all magic. Stephen must marshal his will and keep this fate from occurring in this dimension.

This excellent writing is supported by the strong work of Chris Bachalo. his art blends the style of four color super heroes with the outlandish weirdness of the arcane with ease. There are pages where he mixes colors with with whites to give that feeling of two separate but interconnected dimensions well. Unlike the art in Scarlet Witch, Bachalo’s shuns the ethereal feel and goes for a more visceral take that embraces the weird that is inherent in this world.

Doctor Strange is one of my favorite comics being release currently. I would give it three bear paws out of four. It is definitely worth adding to your pull list and reading it from issue one. I look forward to each month’s new issue.