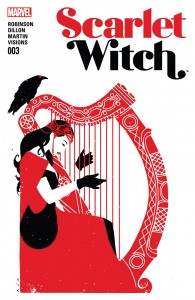 My penchant for urban fantasy is well documented and my love of superheroes is without question. Awhile back, I was perusing the news sites around the comic industry and saw that Marvel would be giving Scarlet Witch her own book. I was intrigued as I was always fond of the character despite how they had spun her up to have the ability to destroy the universe or remake it on a whim. I dug deeper in to the headline and discovered that Marvel would be taking a different tack with the her this time around. The plan was to focus on the witch in Scarlet Witch and explore the craft that had always been hinted at in her story before the incredible reality altering powers became her raison D’etre.

I was sold. I knew that I was going to be picking up the title when it showed up on the shelves at my local comic shop. I am now several issues in and thought I would talk a about it.

A high level perspective is that I am loving the book. It takes a character that I enjoy and examines a part of her that is both interesting and unexplored. This is handled in a way that both exploits the idea of the Scarlet Witch as a superhero as well a practitioner of magic. The book embraces all the quirks of both these ideas and meshes them with very few discordant notes.

The best place to start talking about this book is the covers. Currently, one of the artists doing covers for Scarlet Witch is David Aja. His covers are both simple and compelling. They draw the eye when canning the shelves and invite the reader to spend some time just luxuriating in their crisp beauty. I would love to have several of these covers framed and hanging on my wall.

The interior art on each issue is just as captivating. for the first two issues, the art kept a smokey quality, as if the world was viewed through a lightly fogged lens. This went well with the mysterious and mystical nature that the story was to be following. The third issue saw a departure from this style for a art of the story. The panels took on the familiar feel of a superhero story with sharp edges and clean lines. As the story neared it’s crescendo and Wanda stepped on to the Witch’s Road, The early art style returned with great a weighty thunk. This early style added dramatic weight to the story as it wound it’s way to the end of the issue. A wonderful idea that was well executed.

Robinson is weaving a tale of witchcraft and the Scarlet Witch’s connection to it that is fascinating. he doesn’t ignore what has gone before but instead uses it as a jumping off point. Wanda is seeking to take a step back and from all the trouble that has swirled around her and connect with that piece of herself that she has ignored. She takes up the craft and discovers that something is amiss. There is a sickness within the craft that needs healing. She takes up the call of the hero and begins the journey that all heroes take to free that which she values.

Scarlet Witch is an excellent title. I give it four bear paws out of four. I look forward to picking it up each month and seeing where the story takes me as well as just luxuriating in the beauty of the art within. Well worth adding to your pull list at your local comic shop or on Comixology.