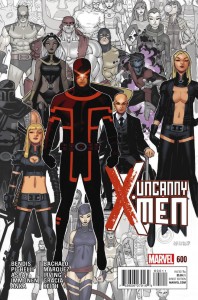 To be 100% transparent, this is the second X-Men title that I have read this year. The first was the All New X-Men where the Iceman story line which I was following.

In the earlier book, Iceman was outed by his friend and teammate, Jean Gray. For those unfamiliar with the X-Men in general and this current story line allow me to provide some knowledge. The current story unfolding in X-Men has Beast traveling through time and bringing the young X-Men from the past to the future in the hopes that they can help stop events from turning out so horrible. In the process of doing this, these younger versions of the X-Men are confronted with what they will become as they grow up as well as become stranded here in the present.

This younger Jean Gray is a telepath of considerable power. During some down time, she pulls Iceman aside after he awkwardly comments on how Majik is hot. Jean asks Bobby why he did this when he is gay. Iceman’s response is predictable, if somewhat quick to adapt to his new circumstance. This raises the question, what about the older Iceman?

Now, the story line in Uncanny X-men isn’t just about Iceman. This book starts off addressing the many inappropriate things that Beast has done since bringing the young X-Men forward in time and stranding them. Storm and the rest confront Beast on his inability to ever consult with anyone over his plans and then leaving the considerable mess to be dealt with by others. As this story unfolds, there are flashbacks to moments before the intervention begins. The reader is treated to the various members of this rag tag band of mutants having quiet moments of reflection and decisions. One such moment is when the young Bobby Drake confronts his older self about his sexuality. Older Iceman laments that it was difficult just facing the ridicule and hatred of being a mutant why would he have added an extra heaping of hate onto his life. He goes on to say that it was easier to focus on the team and being the best X-Man he could be and sublimating. Jean brings up that if he had been truthful with himself and others, he might have been an even better X-Man. Whether Older Iceman comes out to others, remains a question to be answered.

I enjoyed how this portion of the story was handled. It was more honest that I would have expected from an X-Men book. The rest of the story was also intriguing. I want to know what happens now that Cyclops has appeared on the steps of the White house after having gathered all the mutants together there. I want to know what happens as Beast runs away from being a responsible adult. Also, the art in this issue was gorgeous! There were so many great artist on the book that this was a guaranteed home run art-wise.

MY only problem with the book is that the women characters are once still being drawn in costumes that are ridiculous. It seems that we can not get away from this treatment of the female heroes in most comic books. Sigh.

I would give this issue of Uncanny X-Men three bear paws out of four. It tells a good but complicated story about coming out to oneself in a unique fashion. It also tells the story with a bit of candor that I did not expect from a comic book. The art is fantastic and the larger story is interesting as well. Well worth picking up if you missed it last week.