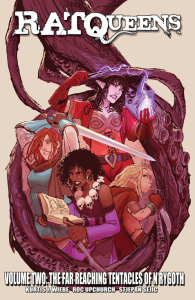 One of the books I made sure to take with me on vacation was the second Volume of Rat Queens. The first volume was just so good I had to get caught up with the title through what was available in trade paperback. I propped my feet up on my resort room balcony and read the book as the tropical sun rose over the palm trees rustled in the breeze coming from the ocean.

It was rather idyllic.

In this volume of Rat Queens there is a slight change in the creative team. Roc Upchurch was the Artist on the first volume. Due to circumstances, he stopped working on the title and Wiebe was able to get stellar artistic talents of Stjepan Sejic. I love Sejic’s work and had no reservations about his ability to do Rat Queens justice.

The story picks up with the Queens ending their celebrations of the defeat of the Orc horde and saving the city of Palisade from certain destruction. As is their wont, the Queens celebrations are are destructive as normal and they are once again brought before the mayor of the city. A new mission is presented to the Rat Queens to recompense the city for destruction of priceless art. The story unfolds to show the audience that things unfinished never remain hidden for long.

In this volume of Rat Queens We get to learn more about each member of the group as they fight for their lives and the lives of every member of the city of Palisade. The puzzle pieces presented in Sass and Sorcery come together as Gerrig is finally able to execute the plan to get revenge for the loss of the only thing that he loved in the world that was taken from him. The hole that this loss left within in soul can only be filled with the death of that which he helped create and, maybe then, his own death will cause the pain to end.

Like the first volume, the story presented in volume two is stupendous. The character which were well realized are given even further depth in here. The audience is given glimpses into the past of almost every character which shows how they ended up being a part of the Rat Queens. The dysfunction of the group is not ignored either as this provides both a layer of tension and comedy that makes this books so good. But, instead of being one dimensional, it evolves with the characters so that even their squabbles are endearing. The art, as expected, is wonderful. There is a series of panels at the end of the book where Dee is faced with a choice. Time is running out and something must be done. Sejic creates such tension in these panels as she contemplates her next move. When the decision is made and the power flows, Sejic creates a sense of power that flows through Dee to the wider world that is just beautiful to see. The transition in artists is also handled well so that the change isn’t ever jarring in the story.

Rat Queens Vol 2 is another must have trade paperback for any fan of comic books. Great characters, wonderful art, and a story that is exciting but leaves plenty of questions to be answered in further stories.