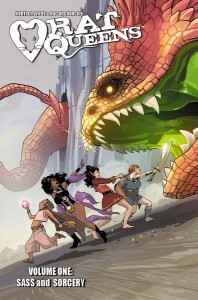 Okay, I am a little late to the game. I just recently discovered the book Rat Queens by Wiebe and Upchurch and I have to say I am sad that I missed this book when it first started coming out.

Sass and Sorcery collects the first five issues of Rat Queens.  Rat Queens tells the story of an fantasy adventuring band composed of women from several different walks of life who’s life’s paths have led them to joining the group. Dee is an atheistic cleric that comes from a family cthulhu-like monster worshipers. Betty is a halfling thief with a penchant for recreational alchemy and candy. Hannah is an elven mage with an attitude and overprotective parents who also happen to be necromancers. The final member of the Rat Queens is Violet. Violet is a dwarf for whom hipster is an art form. She shaved her beard before it was cool and constantly works on her battle cries.

In Sass and Sorcery, the intrepid Rat Queens are settled in to celebrate another successful venture. The only down side is that their celebrates had deleterious side effects on the town in which the live. With the rising of the sun, the Queens and several other adventuring bands discover themselves in the town’s jail facing the consequences of their destructive debauchery. The Rat Queens, along with the other adventuring parties that they dragged into the celebrations, must either complete a service for the city or be forever banished. The assignments given all sound quite simple and something that none of the groups should have any difficulty handling. This assumption is far from the truth as several adventuring groups are met by assassins and traps that either kills the group out right or leave few survivors. It is up to Rat Queens to figure out what is going on and save the city from the darkness waiting to engulf it. 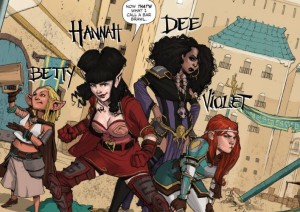 There is a lot to love about this book. The art is gorgeous. Upchurch does an excellent job oat creating characters and scenes that are a joy to behold. He has no difficulty switching from scenes of dialogue to full scale battles. Each are treated with love that shines from the page. Wiebe’s characters are also well crafted. My favorite being Dee. I particularly like her because of how Wiebe treats her. She is an atheist cleric that has left her family over her beliefs. Her family are staunch believers in their lovecraftian god but still love their daughter despite these differences. It is refreshing to see this type of connection in the fantasy genre and Wiebe handles it well. Rat Queens also provides a diverse cast of characters which is something that was exciting. An adventuring party composed of women is virtually unheard of and that they are well rounded characters that you want t o know more about is just icing on the cake. Both the main characters and supporting characters cover the spectrum to present diverse characters as just people that have stories that are worth telling.

I have to give Rat Queens Volume 1: Sass and Sorcery four bear paws out of four. The story is excellent, the characters are interesting, and there are plenty of threads that make me want to pick up the next volume of this book. If you like comics and the fantasy genre, this trade is a must have for your shelf.