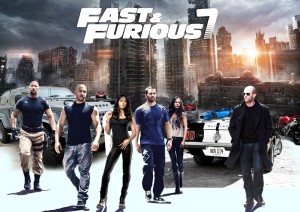 With the death of Paul Walker, the fate of Furious 7 as up in the air. The studio decided to move forward with the movie and added in a CGI version of walker into the scenes that were remaining to be show as well as to the new ending that was created as a memorial to Walker.

The Fast and Furious franchise is one of my guilty pleasures. I love the over the top chase scenes and the added benefit of Vin Diesel, Jason Statham, and Dwayne Johnson in this latest outing ensured that I was going to see this movie. Going in, I knew that I was not the target demographic for this movie. The amount of scantily clad beautiful women placed throughout the movie further reinforced this idea. The audience is only given a shirtless Dwayne Johnson for a few minutes, for which I am still grateful.

The opening scene of the movie sets the tone for the rest of the story. This scene shows Deckard Shaw, played by Statham, on the phone attempting to discover who put his brother in the hospital. The camera pans out to show a regular private hospital room. As Deckard finishes his call, the audience is shown a cowering doctor and nurse. Deckard orders them to take good care of his brother. The scene as he walks out of the hospital is utter carnage. There are dead heavily armored police littered on his path out of the hospital and collateral damage to the building and staff is monumental. Deckard exit from the hospital is topped off with one final explosion erupting from it. I don’t expect logic to play much into a Fast and Furious story line but this scene alone tells you that logic is on vacation and whoever is at the wheel is drunk on tequila and ready to party.

I was reading some of the pre-release press on the movie and saw a piece where it was compared to the Magnificent Seven. I can see the bits where the comparison can be made but the wild west feeling is never something that comes out throughout the movie. In the end, the movies feels very much like a Shadowrun adventure. Deckard, the big bad of the piece, breaks into a supposedly secure governmental agency to retrieve the information on who hurt his brother. In the process, he puts Hobbs, played by Dwayne Johnson, into the hospital. Thus begins the game of cat and mouse between Deckard and Dominick. The Shadowrun nature of the movie crops up as Dominick’s crew discover that Deckard is a black ops agent and they will need governmental help in tracking him down. To get this help, They have to pull off an extraction of a capture hacker in order to use her program to find Deckard. And like any good Shadowrun adventure, the end goal is never that easy and a trip to another exotic location is needed.

The chase scenes are over-the-top and the action is scenery crunching throughout. The dialogue never really rises beyond a that of a Shadowrun Adventure though. If it were clever and quick-witted, a comparison to Leverage could have been made. The thing that was a bit weird for me were the scenes of Paul Walker that were CGI. These scenes enter into the uncanny valley and trigger my hind brain “something is not right here” vibe. The final scene which is more a memorial to Paul Walker also feels off as it doesn’t fit into the story that has been presented. It feels welded on and could have been handled a bit more delicately.

Overall, Furious 7 is a good addition to the Franchise. If you have enjoyed any of the last three Fast and furious movies, I highly recommend seeing this in the theater.